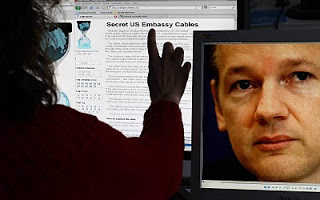 The first batch of recently released secret and confidencial US State Department documents obtained by Wikileaks include over a dozen dispatches from the US Embassy in Caracas, Venezuela, evidencing espionage against the Chavez administration, use of opposition media and politicians as informants and insulting remarks about the country

The Wikileaks release last Sunday, November 28, of over a quarter million US State Department cables obtained illegally has caused scandals worldwide over the methods, perspectives and dirty manuevering of US foreign policy. Almost no country or goverment is exempt from mention in the thousands of secret and classified documents, which are being released over a period of months in order to appreciate the quality of the information, while also subjecting Washington to a type of prolonged torture.

The first several hundred documents made public primarily originate from US embassies in Europe and the Middle East, as well as direct from the State Department and Secretary of State Hillary Clinton herself. But Wikileaks founder Julian Assange, classified as a "terrorist" and "enemy combatant" by the United States, has also released a select group of cables from US embassies in Latin America.

Approximately 14 documents so far have been published that were dispatched by the US Embassy in Caracas, though several other cables from different US embassies worldwide reference Venezuela and President Hugo Chavez. Of the documents released, the majority refer to Washington's obsession with Venezuela's relations with two particular countries: Cuba and Iran.

One document, the first published on Venezuela by Wikileaks, criticizes Venezuela's successful healthcare program, Barrio Adentro, by claiming it is "usurping funds from the public hospital system". The cable, which was authored by former US Ambassador Patrick Duddy in December 2009, quotes only anti-Chavez sources, including a journalist from the opposition newspaper, El Universal, and several doctors working in private clinics and public hospitals.

There is little serious mention of the billions of dollars the Venezuelan government has pumped into the public hospital and healthcare system in order to not only renovate older facilities left in disarray by former governments, but also to create a new healthcare system, which the Embassy cable cynically calls "parallel", to guarantee free, universal care to all Venezuelans.

At the end of the cable, Duddy's comments show either ignorance or an intentional distortion of fact, when he claims, "The quality of healthcare in Venezuela has declined as the GBRV (Goverment of the Bolivarian Republic of Venezuela) has shifted resources from the traditional medical system to "Barrio Adentro". The hard evidence shows the contrary. For the first time in the nation's history, all Venezuelans have access to quality, free healthcare, from the preventive care level, up to complex, high-tech treatments and interventions.

The Embassy cables on Venezuela don't just reveal a distortion of Venezuela's reality, which is an attempt to portray the Chavez administration in a negative light, they also provide insight into who the US government sources are and how US diplomats operate as spies in the country.

One document, a scathing analysis of the alleged Cuban presence in Venezuela's intelligence services and a host of other government institutions, would at first glance be alarming. The cable, cynically titled "Cuba/Venezuela Axis of Mischief: The View from Caracas", was written by notorious former Ambassador William Brownfield in January 2006, and claims Cubans have penetrated almost every aspect of Venezuela's government, culture and economy. It's reminiscent of Cold War era fear-mongering about the "communist expansion" and "red scare" in the hemisphere. This time, however, instead of the Russians, it's the "Cubans are coming...they are everywhere". Be alarmed, be very alarmed.

Except that, when read in detail, it becomes clear that the sources behind this alleged "Cuban communist takeover" are actually high-profile opposition leaders, such as ex Governor and now fugitive from justice, Manuel Rosales, big business executives and journalists from anti-Chavez media.

Brownfield even writes in the cable statements such as "Anecdotal reporting suggests...", "Less reliable reports indicate..." and "Unconfirmed sensitive reporting suggests...", evidencing the weakness of the information provided, which was marked "Secret/No Foreign Distribution" and was sent to the Secretary of State, the National Security Council, the Pentagon's Southern Command (SOUTHCOM), and a host of other US embassies and consulates ranging from Brasilia, La Paz, Lima, Managua, Quito, Buenos Aires, Santiago and Mexico, to Brussels, Lisbon, Madrid, Paris, London, Rome and The Hague.

Information that is unconfirmed, comes from exclusively biased sources (all anti-Chavez) and overall has no foundation in reality, is then used to craft US policy towards Venezuela. The documents published by Wikileaks evidence that this dangerous scenario is repeated in US diplomacy around the world.

The Caracas documents also evidence how Embassy employees violate their status as diplomats to engage in espionage against the Venezuelan government. In the "Cuban scare" cable, Brownfield reveals that the Department of Defense monitors flight activity from Cuba to Venezuela daily, and then Embassy personnel try to gauge the number of passengers coming of the planes: "Embassy officers have noted regular flights of Cubans - or Venezuelans returning from official visits to Cuba - at Caracas' Maiquetia airport...Post cannot determine how many Cubans are on the flights..."

What Brownfield is most concerned about, apart from standing vigilance at the airport watching the planes come and go, is how the US could be affected by the Cuba-Venezuela relationship. "The impact of Cuban involvement in Venezuelan intelligence could impact US interests directly", he claims, concerned about "the expertise that Cuban services could provide...about the activities of the USG". More or less, Washington is worried their clandestine actions in Venezuela will be exposed as the Venezuelans improve their intelligence capacity.

In another document, titled "Explaining Venezuela's coziness with Iran" Ambassador Brownfield invokes the "Iran scare" and comments, "Venezuela's support for a country that has nuclear ambitions, supports terrorism and talks about wiping Israel off the map is of grave concern. It also alarms nations - such as France...We can exploit this alarm". How exactly would they do that, interfere in Venezuela’s relationship with France?

Brownfield remarks that Washington should not "dismiss the uranium rumors", referring to allegations that Venezuela was providing uranium to Iran to make bombs. But a later cable, written by the more steady-headed Charge D'Affairs John Caulfield in June 2009, contradicted Brownfield's war-mongering attitude. "Although rumors that Venezuela is providing Iran with Venezuelan produced uranium may help burnish the government's revolutionary credentials, there seems to be little basis in reality to the claims...it is highly unlikely that Venezuela is providing Venezuelan uranium to third countries".

In 2008, the US Embassy in Caracas decided it was time to employ the heavy services of the Pentagon's psychological operations team to bombard Venezuelans with pro-US propaganda, to counter, what an Embassy cable claimed in March 2008, "Chavez's anti-americanism".

"Embassy Caracas requests DOD (Department of Defense) support in the execution of its strategic communications plan. The goal for this program is to influence the information environment within Venezuela...DOD support would greatly enhance existing Embassy Public Diplomacy and pro-democracy activities".

Infuencing the "information environment" in Venezuela with Pentagon support is clearly an outright violation of Venezuela's sovereignty, which appears to be a common denominator in most of the Embassy cables published so far on Venezuela. The State Department's 2011 budget includes a special multimillion-dollar fund for a "30-minute, 5-day a week program in Spanish in Venezuela" and the Pentagon's includes a new program for "psychological operations" in the Southern Command (Latin America).

Some of the information in the cables can be verified by fact and corroborating evidence, while other data remains in the realm of rumors and bogus sources. What is clear is the that the documents reaffirm the increasing US aggression against Venezuela and its hostile foreign policy against the Chavez administration, including a willingness to use unsubstantiated rumors to make dangerous accusations.
Posted by Eva Golinger at 11:58 AM

Eva - thanks for all your efforts to report factual information about Venezuela.
Americans are totally bombarded with nonsense from our rightwing media.

As usual, a very informative commentary.
There are two matters of emphasis on which I would like to comment
First, I doubt very much that US anxiety about Cuban involvement in Venezuelan intelligence services resembles the old Cold War anxieties. These latter were rooted in the fear of Soviet control. The US is not worried that Cuba will control Venezuela. They know however that the Cuban Revolution was able to stand up to US opposition because Cuban intelligence could match that of the US, perhaps in some ways even surpassing it. They naturally do not want the Cubans to raise Venezuelan intelligence to Cuba's own very high level
On the matter of health care, it is likely true that in a very limited and cynical sense health care has deteriorated under the Bolivarian government. If a "good" health care system in one in which a highly disproportionate amount of available funding goes to health care for the elite, the Venezuelan system is no longer "good." These people likely feel that every centavo directed towards basic health care for the general population is money brazenly stolen from the higher good of a luxury health care system for the elite.