Luis Eladio Pérez, Gloria Polanco, Jorge Eduardo Gechem and Orlando Beltrán have just boarded the airplane in Venezuelan territory after having been released by the Fuerzas Armadas Revolucionarias Colombianas Ejército del Pueblo (FARC-EP) in a unilateral humanitarian gesture for peace in Colombia. We are expected to receive Luis, Gloria, Jorge and Orlando at approximately 6pm, Venezuelan time, in Maiquetía airport outside of Caracas, where their family members are anxiously waiting. This humanitarian gesture is a result of the international solidarity and humanistic foreign policy of the government of President Hugo Chávez in Venezuela and the incredibly persistent and determined work for peace that Colombian Senator Piedad Córdova has been pursuing for over a decade.

The FARC has stated today that this is the last unilateral release of hostages until the Colombian government ceases military operations in the areas where the FARC is residing. Colombian President Alvaro Uribe has made NO gestures or taken any steps whatsoever to further peace in Colombia, but rather has agitated the crisis by increasing military offensive measures in the regions where FARC is known to operate. Were it not for President Chávez and the revolutionary process in Venezuela, these four individuals who have been held hostage for 7 years would not be free, nor would Clara Rojas and Consuelo Gonzalez have been released in early January after 5 years as hostages in the Colombian jungle.

The US Government has critized and smeared President Chávez's efforts for regional peace by trying to brand him as an "ally of terrorists and drugtraffickers". But time will show that the US Government funded and armed Plan Colombia has been the #1 instigator of war, conflict and misery in Colombia, whereas President Chávez's actions have brought peace, love and hope to the people of Colombia.

LAGGING ON THE BLOGGING, SORRY! My book on a major Paris bookstore bookshelf

So sorry for the slacking on the blogging, folks! The year 2008 has just started out in a whirlwind and I've been a bit busy. But I've also been caught between dreamworld and reality, trying to focus on finishing up my third book (name withheld for copyright purposes) and trying to write another, more personal tale. Sometimes, however, it seems that writing as fiction may be better than writing as real life, so as to avoid any blemishes or cause any public scandals (just kidding! kinda...)

Anyway, I was traveling a bit in France in January, and proudly found my book The Chavez Code - French version Code Chavez - displayed prominently on the shelf of Paris' largest bookstore. That made me feel good, not in a selfish way, but really feel good that the book is reaching wider audiences. Also, I just happen to love France and Paris, so I just felt good in general.

Speaking of books....Bush vs. Chavez is finally really for sale in the US! Monthly Review Press (the publisher) sells it on their website

Please do buy and read it and recommend it to your friends!!! Bush vs. Chavez: Washington's War on Venezuela is the continuation of The Chavez Code, from 2005 to the end of 2006 and focuses on short - but detailed and well-documented - descriptions of Washington's latest strategies of aggression against the Bolivarian Revolution. PYSOPS, Asymmetric Warfare (Wizard's Chess), Media Terrorism, Secession, Invasion Plans - these are just a few of the scary gems I researched and detail in the book. Read it and let me know what you think. 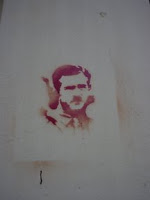 So, relations between Venezuela and Washington haven't gotten off to a good start in 2008, in fact, things are worse than ever. Despite President Chávez's "3 R" New Year's Resolution to revise, rectify and re-impulse the revolution, Washington is not rewriting or rectifying its Venezuela strategy, in fact, its revising it and reimpulsing its level of aggressivity and threat against Venezuela. January started out with more slurs against President Chávez by different US government officials, including Drug Czar John Walters calling Chávez a "drug trafficker" (more or less), and Condoleezza Rice hurrying down to Colombia to cuddle with paramilitary leader (and head of state) Alvaro Uribe to express the US Government's full backing of Colombia in its difficulties with Venezuela. Despite more cocaine flowing out of Colombia each day, the US Government has now classified Colombia as "fully cooperative" with the war on drugs and Venezuela as "fully uncooperative". I guess "cooperative" refers to allowing US forces and allies to come in and facilitate the drug flow, since that's how it works under Plan Colombia and that's precisely what the Chávez government has refused to accept.

Hands up to Chávez for ensuring the release of Clara Rojas and Consuelo Gonzalez, two former captives held by the FARC in Colombia. Today, we are on the verge of seeing another 4 captives released to Chávez by the FARC in a unilateral showing of desire for peace and the consolidation of a humanitarian agreement with the Colombian government. Unfortunately, Uribe's government has stated it will not negotiate or agree to anything with the FARC. So, if it wasn't for Chávez, no one would get released and peace would never be on the horizon.

By the way, Uribe is pushing for yet another constitutional amendment to allow him to run again for president in 2010. Colombia's constitution pre-2004 only allowed for 1 presidential term of 4 years. Uribe pushed for an amendment to allow for a 2nd term reelection, which was passed despite heavy opposition, and he ran and won the presidency again. Now, he wants to amend the constitution to allow for a 3rd term. Do I hear cries of "president-for-life", "indefinite president", "dictator" or anything like that coming out of the US?????? Yet another double standard at play.

The US Directorate of National Intelligence and National Intelligence Director General Michael McConnell released its Annual Threat Assessment in early February and dedicated 3 1/2 whole pages to Venezuela - almost the same Iran, Syria, Irak and Russia got!!!! Boy has Venezuela really moved up on the list of US targets! Actually it's a pretty serious (and very scary) matter. Venezuela is now a direct military target of US defense and intelligence agencies as confirmed by this "threat assessment". Watch how this new classification plays out over the next few months. No doubt there will be an increase in US military presence in this region and a lot more bad mouthing of Chávez coming out of Washington - mark my words.

Meanwhile, ex-Ambassador to Venezuela William Brownfield, who moved next door to Colombia, can't seem to keep his mouth shut. He's talking more now about the Venezuelan government than he was when he was shacking up in Valle Arriba in Caracas. His latest statements about the drug trafficking "explosion" in Venezuela (since he left) made on a Colombian radio station, got him in to trouble with the Colombian government, which received a formal complaint from the Venezuelan Foreign Ministry about Brownfield's big and lying mouth. He apologized, but not for what he said, only for saying it on the radio.

Did you all hear about the Peace Corp and Fulbright Scholars getting busted in Bolivia for spying?? Evo is just kicking some US spy ass these days. He's exposed US Ambassador Philip Goldberg on numerous occasions for spying, consorting with paramilitaries, funding Bolivian opposition groups illegally, trying to run illegal "special ops" units around Bolivia and now using Fulbright Scholars to spy on "venezuelans and cubans" in Bolivia. I think it is especially cool that Fulbright Scholar Alexander Van Schaick came forward about all this and exposed CIA dirty tactics. Read about it here.

OK, that's enough catching up for today. I hope to stay on track with the Blog more in the upcoming days and weeks. We have regional elections here in Venezuela this year and believe me, things are only going to get more intense.

Feel free to write in the comments sections any questions or suggestions on things to write about from the ground here in Caracas.

Chao!
Posted by Eva Golinger at 3:20 PM 3 comments: Links to this post