Class is in Session & Soup's ON! 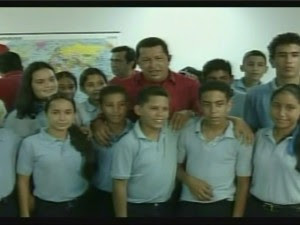 Today President Chávez was up bright and early to inaugurate on national television (en cadena nacional) the start of the 2007-2008 school year! Live from the city of El Tigre en eastern State of Anzoátegui, President Chávez launched 15 new Bolivarian schools nationwide and shared the first day of school with 526 new students at the recently built José María Vargas Bolivarian School. This particular elementary school was designed to service 3,527 families that were victims of the massive flooding and mudslides that occured in the State of Vargas in December 1999, and who were subsequently relocated to Anzoátegui after losing their homes in the natural disaster.

Today in Venezuela, 60% of the population is actively incorporated in the formal education sector. There are 9 million schoolchildren and adolescents that encompass 32% of that total; 4.2 million young, middle-aged and senior adults involved in the social education missions (Mission Robinson (basic literacy); Mission Ribas (continuing secondary education); Mission Sucre (university-level education)), which is another 18%, and another 10% studying in the nation's private and public universities and higher education institutes. Venezuela is one of the only countries in the world where 60 out of every 100 inhabitants participates in the education sector.

Venezuela may make the Guinness Book of World Records for the World's Largest Stew! This past Saturday the Food Ministry led by General Rafael Oropeza oversaw the cooking of a 3,960 gallon "sancocho" (that's stew en español), containing 6,600 pounds of chicken, 4,400 pounds of beef and lots more veggies. So much for all those opposition crazies claiming there is no chicken or meat in the country! This giant stew serves 60,000 to 70,000 people, and a few thousand were out and about all afternoon on Avenida Bolivar eating their share. Looks like we kicked Mexico's ass as the reigning Guinness World Record for a pot of 1,413 gallons of spicy soup made in Durango last July. And we left all those fancy supermarket chains throughout Caracas looking like fools with their economic sabotage scare tactics and constant hording of basic food staples (like limiting the amount of meat, chicken, sugar or other products you can buy to one per shopper). If they won't sell it, Chávez will give it away. Yeah baby, STEW YOU! Yes, I did say "give it away". And that's just what the Food Ministry did on Saturday. Along with plates of giant world-record-breaking sancocho, the Ministry gave out 2 million bags containing 15 kilos of vegetables and 2 million kilos of sugar for free during Saturday's MegaMarket on Avenue Bolivar to the thousands of weekend shoppers and families that came out for the occasion. The Ministry also offered a special discount package for schoolkids: a backpack, pencils, pens, notebooks, markers, pencil sharpeners and other items for a mere 24.000 Bolivares (that's about $10 US on the official market and $6 on the black market).

On a more evil note, the Bush White House has once again certified Venezuela as "Major Drug Transit" country that has "failed demonstrably during the previous 12 months to adhere to [its] obligations under international counternarcotics agreements..." This nonsense began in 2005 when the Chávez government caught the US Drug Enforcement Agency (DEA) involved in acts of espionage, sabotage and illegal activity in the country instead of helping Venezuela's drug enforcement agencies to do their jobs. My second book, Bush vs. Chávez, has a chapter dedicated to this topic with reference to documents given to me by Venezuela's leading generals and officials who ran the anti-drug command in the National Guard and compiled one hell of a file demonstrating DEA sabotage and irregular activity. Since the DEA collaboration was formally suspended by the Venezuelan government in September 2005, the White House has tried to bully its way back on the scene by labeling Venezuela a "drug transit" and "noncomplicit" collaborater with counternarcotics activities. But in reality, Venezuela's counternarcotics efforts have only gotten better without the DEA slipping kilos of cocaine into their own briefcases and "fixing" the paperwork.

The most ridiculous part about this White House certification is that the sanction for Venezuela for "failing demostrably" to help the DEA deal drugs, is supposed to be a suspension of all economic aid to the country from the USA. But this is what George W. has to say about that: "I have also determined, in accordance with the provisions of section 706(3)(A) of the FRAA, that support for programs to aid Venezuela's democratic institutions is vital to the national interests of the United States." (See here) That means that the millions of US taxpayer dollars flooding into opposition groups in Venezuela through USAID, NED, Freedom House and other sketchy "democracy subverters" will continue in full force.

My hair is much shorter in this video that was filmed last year by Dateline in Canada, but it's still worth watching!! It's actually pretty good. Thanks to Aaron and his crew for their hard work and for getting this out there!

Oh, I almost forgot to mention my major opposition and dissent to the now official 1/2 time change that will take place on Monday, September 24, 2007. Like Venezuelans need another 1/2 to be late. I just think the whole thing is a waste of...time!
Posted by Eva Golinger at 3:42 PM

Eva,
I am curious if you have been able to look at US Department of State discretionary funding? For example one program aimed at supporting a group in Haiti was getting close to 100k from the NED but 350k directly from discretionary spending from State. Do you think it is possible that a huge discretionary budget exists that would dwarf
NED/USAID budgets? Also do you have any estimate on how large the discretionary budget of the embassy in Caracas is?
PS. Although HaitiAnalysis is centered on Haiti we have put up a link to this blog.

This is totally off topic but I just wanted to say:

I never thought I'd have a girl hero....

Thanks Daryl! Off topic comments are always accepted, especially when they are flattering compliments to me!

Regarding the State Dept. discretionary funding, I have the whole budget for the State Dept. and know that absolutely there are many more millions come out of other programs and areas being invested in destabilization in Venezuela. But, the discretionary stuff is more difficult to obtain access to and State is stonewalling on its FOIA responses to us. But this is the type of stuff that FOIA will eventually produce. I don't know the US embassy budget in Caracas, but I did an article recently (en español) on the State Foreign Operations Budget which allocates several billion dollars to propaganda stuff in Latin America (Venezuela & Cuba principally) and a more than $600 million to "support for NGOs" - not USAID or NED support. So, there is a lot more cash floating around out there.