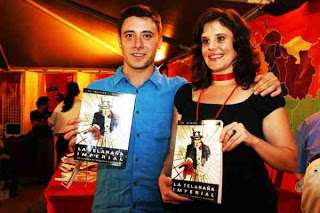 The Empire’s Web: An Encyclopedia of Interventionism and Subversion is a tool essential to understand the deep and complex mechanisms of U.S. interventionism that has plagued people’s movements around the world during the last two centuries. In this book, the autors demonstrate the connections and relationships between different actors, institutions, government agencies, NGOs, think tanks and political parties around the world, such as the Rockefellers, CIA, Human Rights Watch, National Endowment for Democracy (NED), Bilderberg Club, USAID, the Military Industrial Complex, and many others, and how they form part of a massive network seeking world domination and imposition of the capitalist-consumerist model. The Empire’s Web is not your typical book. Use it as a reference manual, a guide to imperialism, a political tool that can help you understand the intricacies of the relationships between actores and entities that act against the will of sovereign peoples. There is not one entry in this book - person, institution, multinational, agency, NGO, think tank or strategy - that is more important than the others. This is The Empire’s Web; get to know it well, because if you don’t, you could get trapped in its fatal grasp.