Venezuela: The Threat of a Good Example? 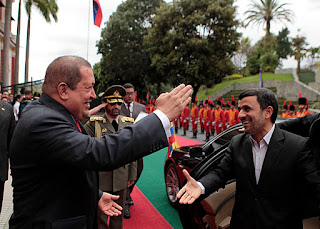 Washington has made no secret of its disdain for Venezuela’s President Chavez and mass media have turned a democratic leader into a dictatorship. Does Venezuela really represent a threat to the United States or is the hype just an excuse for regime change?


[NOTE: I accompanied President Chavez on his last trip to Iran in October 2010 and can attest to the legitimate relationship between both nations. We did not visit nuclear plants, instead we visited housing construction sites which were subsequently used as models for a public housing program currently underway in Venezuela in joint venture with Iran. I also personally visited the Iranian-Venezuelan tractor factory in southeastern Bolivar state in Venezuela several years ago and rode on one of the tractors. I can solidly say it was not radioactive nor a front for an atomic bomb.]

The visit of Iranian President Mahmoud Ahmadinejad to Latin America this week caused a frenzy in Washington. The thought of US Enemy #1 just miles away, south of the border, cozying up to nations once dominated by Washington’s agenda was too much to bear for a government desperately trying to isolate Iran and rid the Persian nation of the Islamic Revolution. Days before Ahmadinejad’s arrival to Venezuela, his first stop on a four-country Latin American tour, the US State Department warned the region of receiving the Iranian President and strengthening ties while Washington was intensifying sanctions against Iran and increasing pressure on Ahmadinejad’s government. As a sign of its severity, Washington also expelled a Venezuelan diplomat serving as General Consul in Miami, for alleged links to an unsubstantiated Iranian plot against the United States.

Venezuela’s President Hugo Chavez laughed off Washington’s warnings as words from a “ridiculous empire” that no longer “dominates us in Latin America”. “We are sovereign nations”, Chavez made clear, as he received the Iranian President with open arms. Chavez even ironized about Washington’s accusations that the Iranian-Venezuelan relationship represents a threat to the United States.

“They accuse us over and over again of plans to attack the United States. They say we are building a bomb to launch against Washington. See that hill right there”, said President Chavez to journalists at the presidential palace covering Ahmadinejad’s arrival. “The grass will open up to reveal a big atomic bomb that President Ahmadinejad and I will launch against the White House”, he joked.

“The only war Venezuela and Iran are waging together is the war against hunger, against poverty, against exclusion”, clarified Chavez in a stern tone.

For years now, US government officials, outside analysts, think tanks, government consultants and media commentators have made wild-eyed accusations against Venezuela, claiming it is building missile bases with Iran to plan attacks against the US and hosting terrorist training camps for members of Al Qaeda, Hezbollah and the Iranian Revolutionary Guard. These absurd claims go as far to allege Venezuelan-Iranian joint ventures, such as car and bicycle factories and milk processing plants are fronts for secret underground uranium enrichment sites where nuclear bombs are being made right now for use against the United States. Even a commercial flight between Caracas and Teheran was claimed by these US “analysts” and some members of Congress, such as Connie Mack and Ileana Ros-Lehtinen (both Florida Republicans), as a “terror flight” used to transport “radioactive materials” and “terrorists”.

As ridiculous as Washington’s allegations against Venezuela may seem, these dangerous, unsubstantied accusations are being used to amp up hostilities against the South American nation, channel multimillion-dollar funding to anti-Chavez groups in an attempt to destabilize the Venezuelan government and to further perpetuate a media campaign demonizing the Venezuelan head of state, painting the oil-producing country as a dictatorship.

Over the past few years, as the campaign against Venezuela has intensified, common jargon in mass media referring to Venezuela and President Chavez includes terms such as “dictator”, “authoritarian”, “tyrant”, “terrorist”, “threat” and portrays the Latin American country as a “failed state” where human rights are constantly “violated” and freedom of expression is non-existent. Anyone who has ever visited Venezuela during the Chavez administration knows that not only is there no dictatorship, but democracy is open, vibrant and participatory, free speech flourishes and Venezuelans enjoy more human rights guarantees than their northern neighbors in the United States. Media need be reminded that President Chavez has been elected by more than 60% of the vote in transparent electoral processes with 80% voter participation certified by international observers.

As President Chavez pointed out recently, the Venezuelan government is investing more in social programs and anti-poverty measures each year while countries such as the United States are cutting back social services. In Venezuela, poverty has been reduced by over 50% during the last ten years, thanks to the social policies of the Chavez administration, while in the United States, 1 in 5 children are currently living in extreme poverty. Unemployment in Venezuela was 6.5% in December 2011, while in the US, the rate sat at 8.5%. Exclusion, lack of opportunity, voter abstention and other social ills are on the rise in the United States.

“Obama, forget about it. Mind your own business and take care of your own country, where you have a lot of problems”, suggested President Chavez during a recent speech. Chavez was also quick to point out that Obama just cut federal assistance for home heating oil costs for low income families, leaving thousands to suffer through a bitter cold winter, choosing between food or warmth. Meanwhile, the Venezuelan government just renewed and expanded its home heating oil assistance program to communities in the US through Citgo, its US-based oil company. For the past 7 years, the Venezuelan company Citgo has been the only oil corporation in the US willing to provide reduced-cost home heating oil to those in need. It’s ironic that the Venezuelan government is helping people in the US while the US government and US companies refuse to do so.

The relationship between Venezuela and Iran may cause alarm in some circles in Washington, but it’s not for the reasons portrayed in the media. As founding members of the Organization of Petroleum Exporting Countries (OPEC) in 1960, Venezuela and Iran have shared close relations for decades. Both countries have strategic interests around the world. However, it wasn’t until recently that these relations broadened beyond energy.

Iran’s entry into Latin America as a trade partner, along with China and Russia, is the real threat to US hegemony in the region. US companies, that have monopolized the hemisphere for over a century, are now being replaced by Asian, Middle Eastern and European ventures willing to provide more enticing offers to countries such as Venezuela. Agreements with Iran, for example, include technology transfer, not just the purchase of products. The car factories Iranian companies have built in Venezuela are not just for assembly of an Iranian product. The agreements include providing Venezuelans with the know-how to produce cars from the raw materials to the end product. This knowledge is essential to ensure long-term development, growth and economic stability.

The hyped-up, falsified accusations of terrorism and warmongering against Venezuela – none of which have ever been substantiated with real evidence – are dangerous attempts to scare public opinion into justifying some kind of aggression against a peaceful nation. Venezuela has never invaded, attacked, threatened or intervened in another country, nor has it bombed or assassinated the citizens of other nations. Venezuela has a policy of peace, and it’s never broken or violated that promise.

Venezuela also has the sovereign right to engage in relations with other nations as it sees fit and to develop its own internal policies to best benefit the well being of its people. That seems to be the greatest threat of all to the United States.
Posted by Eva Golinger at 1:56 PM

Well, India is also threatening the US monopoly in Latin America, yet India is not demonized to the extent Iran is. It seems the volume of demonization is rather directly proportional to non-submission to the US Department of State policies.

Another thorough, devastating, slap-down from you, Eva, of the asses in Washington and the grasping schemers in US corporate boardrooms. Well done! My sneaking fear is that being shown up for what they are will ultimately - they've not got it in them to admit that they're wrong - just increase their frustrated ire against Venezuela. Scott Griffith.

The demonization of both countries is exactly as stated. The US Imperialist Elite class cannot bear thought of any sovereign nations operating and trading freely without them being able to exploit it and profit off of it.

The entire system of Capitalism, not just the Western exploitation version creates an atmosphere that will always be toxic to the interests of the Peoples of the World.

The only threat Chavez and Ahmadinejad pose to them is the very REAL threat of IDEAS - ideas the population of the United States has begun to embrace as they rise up against the Class War.

Diane,
Well said "...rise up against the class war".
Class warfare has been raging in the USA and other capitalist nations with only one side in the fight. The ruling class has been exploiting, stealing from, and murdering the victim classes of all nations and this aggression is increasing at an alarming rate.

When a leader like Hugo Chavez has the skill and courage to defy them, they will naturally paint horns on his head; and they own mainstream media.
We, all of us, need to support and work in concert with President Chavez and all those with the courage to stand up against the ruling class. Until we stop them, the ongoing horrific abuse will continue.