A Union is Born: Latin America in Revolution 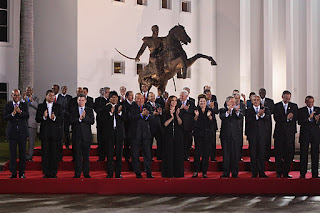 While much of the world is in crisis and protests are erupting throughout Europe and the United States, Latin American and Caribbean nations are building consensus, advancing social justice and increasing positive cooperation in the region. Social, political and economic transformations have been taking place through democratic processes in countries such as Venezuela, Bolivia, Ecuador, Nicaragua, Uruguay, Argentina and Brazil throughout the past decade, leading to a massive reduction in poverty and income disparity in the region, and a substantial increase in social services, quality of life and direct participation in political process.

One of the major initiatives of progressive Latin American governments this century has been the creation of new regional organizations that promote integration, cooperation and solidarity amongst neighboring nations. Cuba and Venezuela began this process in 2004 with the founding of the Bolivarian Alliance for the Peoples of Our America (ALBA), that now includes Bolivia, Ecuador, Nicaragua, Dominica, St. Vincent’s and the Grenadines and Antigua and Barbuda. ALBA was initially launched in response to the US government’s failed attempt to impose its Free Trade Agreement of the Americas (FTAA) throughout the region. Today ALBA is a thriving multilateral organization with member nations that share similar political visions for their countries and for the region, and includes numerous cooperation agreements in economic, social and cultural areas. The fundamental basis of trade amongst ALBA nations is solidarity and mutual benefit. There is no competition, exploitation or attempt to dominate amongst ALBA states. ALBA even counts on its own currency, the SUCRE, which allows for trade between member nations without dependence on the US dollar.

In 2008, the Union of South American Nations (UNASUR) was formally established as a regional body representing South American states. While ALBA is much more consolidated as a unified political voice, UNASUR represents a diversity of political positions, economic models and visions for the region. But UNASUR members share the common goal of working towards regional unity and guaranteeing the resolution of conflicts through peaceful and diplomatic means. UNASUR has already played a key role in peacefully resolving disputes in Bolivia, particularly during an attempted coup against the government of Evo Morales in 2008, and has also successfully moderated a severe conflict between Colombia and Venezuela, leading to the reestablishment of relations in 2010.

Two hundred years ago, South American Independence hero Simon Bolivar, a native of Venezuela, dreamed of building regional unity and creating a “Patria Grande” (Grand Homeland) in Latin America. After achieving independence for Venezuela, Bolivia, Ecuador and Colombia, and fighting colonialists in several Caribbean nations, Bolivar attempted to turn this dream of Latin American unity into reality. His efforts were sabotaged by powerful interests opposing the creation of a solid regional bloc, and eventually, with the aid of the United States, Bolivar was ousted from his rule in Venezuela and died isolated in Colombia several years later. Meanwhile, the US government had proceeded to implement its Monroe Doctrine, a decree first declared by President James Monroe in 1823 to ensure US domination and control over the newly-freed nations in Latin America and the Caribbean.

Nearly two hundred years of invasions, interventions, aggressions, coup d’etats and hostilities led by the US government against Latin American nations shadowed the 19th and 20th centuries. By the end of the 20th century, Washington had successfully imposed governments in every Latin American and Caribbean nation that were subordinate to its agenda, with the exception of Cuba. The Monroe Doctrine had been achieved, and the US felt confident in its control over its “backyard”.

The unexpected turn at the beginning of the 21st century in Venezuela, formerly one of Washington’s most stable and subservient partners, came as a shock to the US. Hugo Chavez had been elected President and a Revolution had begun. A coup d’etat attempt in 2002 failed to subvert the advancement of the Bolivarian Revolution and the spread of revolutionary fever throughout the region. Soon Bolivia followed, then Nicaragua and Ecuador. Argentina, Brazil and Uruguay elected socialist presidents, two of them former guerrilla fighters. Major changes began to occur throughout the region as the peoples of this vast, diverse and rich continent assumed power and made their voices heard.

Social transformations in Venezuela that gave voice to people’s power became exemplary for others in the region, as did President Chavez’s defiance of US imperialism. A powerful sentiment of Latin American sovereignty and independence grew stronger, even reaching those with governments aligned with US interests and multinational control.

On December 2-3, 2011, the Community of Latin American and Caribbean States (CELAC) was born and the overwhelming force of a continent nearly 600 million strong, achieved a 200-year dream of unity. The 33 member nations of CELAC all agree on the unquestionable necessity to build a regional organization that represents their interests, and that excludes the overbearing presence of the US and Canada. While CELAC will take time to consolidate, the exceptional commitment evidenced by the 33 states present at its launching in Caracas, Venezuela, cannot be underestimated.

CELAC will have to overcome attempts to sabotage and neutralize its expansion and endurance, and the threats against it and intents to divide member nations will be numerous and frequent. But the resistance of the peoples of Latin America and the Caribbean who have resumed this path of unity and independence after nearly two hundred years of imperialist aggression, demonstrates the powerful force that has led this region to become an inspiration for those seeking social justice and true freedom around the world.
Posted by Eva Golinger at 3:16 PM

I hope we can read other of your articles on the solidification of the Latin American unity within few years.
There is still a long path ahead to overcome but we,the united peoples, can achieve it fullfiling what once was just a dream far away from becoming true.

Everyone has got a important role to play during this process,giving that Unity is merely based on the honest work of each individual.
For all of us who have borded on the vessel of unity,there is not way back conversely our destination must be the betterment of mankid, quoting those freedom fighters who recenlty tried to break the criminal Israeli blockade against Gaza.

May God be gracious to thou, Eva.

Only Cuba was strong enough to withstand the US onslaught of The Condor Plan. In Cuba the flame of revolution was kept alive, at times it was the only light to be seen in that blockaded little country. Now that flame is being passed on from hand to hand, one vote at a time.

Let us dream of the time that a future revolutionary government applies for membership of CELAC on behalf of the electors of the United States.

I hope that I will see that day in my lifetime too.