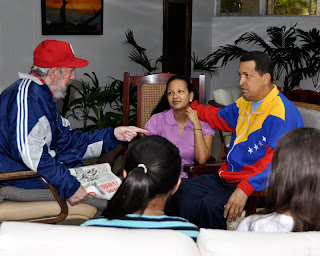 
Pictures, video and audio of an encounter between Venezuelan President Hugo Chavez and Cuban leader Fidel Castro evidence the South American President is recovering satisfactorily after surgery to remove a pelvic abscess and minor tumor


UPDATE JUNE 30, 9:30PM CARACAS: PRESIDENT HUGO CHAVEZ JUST SPOKE BEFORE THE NATION AND INFORMED THAT SUBSEQUENT TO THE SURGERY TO REMOVE HIS PELVIC ABSCESS, WHICH WENT WELL, HE SHOWED SOME SIGNS OF FURTHER PROBLEMS DURING THE RECOVERY PERIOD AND THEN HAD FURTHER TESTS WHICH DISCOVERED A SMALL CANCEROUS TUMOR WHICH WAS REMOVED IMMEDIATELY AND SUCCESSFULLY IN ITS ENTIRETY. HE INFORMED THAT HE IS RECOVERING VERY WELL, AS EXPECTED AND SHOULD BE IN FULL FORM QUITE SOON. DURING HIS SPEECH, HE APPEARED STRONG, ENERGETIC, CHARISMATIC AND DETERMINED, AS ALWAYS, TO CONTINUE THE REVOLUTION AND THE FIGHT FOR SOCIAL JUSTICE IN VENEZUELA AND LATIN AMERICA. LONG LIVE CHAVEZ! VIVA CHÁVEZ!!

Much hype has been made about the state of President Hugo Chavez’s health. International media have perpetuated numerous unfounded rumors claiming the Venezuelan head of state is in critical condition, has cancer, is in a coma or even passed away. These media outlets, which range from notoriously reactionary anti-Chavez press such as El Pais (Spain), Fox News and the Miami Herald (and its Spanish version, El Nuevo Herald) to the somewhat more respectable BBC, NPR, CNN, New York Times and Washington Post, have all circulated these wild myths and stories about President Chavez’s condition, without presenting any evidence to substantiate their allegations.

Private Venezuelan media have been equally as disgraceful, circulating the same rumors promoted in international press and online, and creating others. Some have gone so far as to claim President Chavez is “inventing his ailment” to “gain political points and sympathies” from his followers. One columnist who writes for a major national daily, El Universal, has dedicated his notoriously rumor-based articles to Chavez’s health since the Venezuelan chief underwent surgery for a pelvic abscess on June 10. This alleged “journalist”, Nelson Bocaranda, has defamed and slandered President Chavez, and gravely misinformed the public by writing that Chavez has prostate cancer and has been undergoing radioactive treatment in a specialized clinic in Havana.

Much of the false information about President Chavez circulating in public opinion originated from an article published in El Nuevo Herald, claiming “US intelligence officials” informed the Miami publication the Venezuelan President was suffering from a “terminal illness”. Even State Department officials, during a Congressional hearing on Venezuela last week in the House Committee on Foreign Relations, alleged they had information about President Chavez they couldn’t “make public”.

CNN in Spanish has been doing sensational nightly programs on the Venezuelan leader’s health situation, bringing in “experts” on every possible ailment Chavez is claimed to be suffering from, and morbidly analyzing the “consequences” of his “tragic downfall”. CNN in English has also done segments ridiculously inquiring “Where in the world is Hugo Chavez?” when from the beginning of his surgery it was of public knowledge that the Venezuelan President was recovering in Cuba.

Most of these media, and those who own them, would be overjoyed to have the polemic leftist President out of the picture for good. These same media have “killed” Fidel Castro dozens of times over the years, only to bite their tongues every time the Cuban leader makes public appearances, energized and astute for an 84-year old revolutionary.

The overly-exaggerated reaction to Chavez’s health has in large part resulted from the habitual public appearances he’s made during the past 12 years, which everyone – literally everywhere – has grown accustomed to. His absence from the limelight has left a massive hole in media that report on Venezuela. Even those from opposition groups and political parties in Venezuela have been left at a loss without President Chavez.

When he’s here, the opposition wants him gone, and has attempted everything from coup d’etats, economic sabotages, assassination attempts and even calling for foreign intervention, to get him out. When he’s temporarily absent, they want him back. When photographs and video images were shown of him from his recovery location in Havana, opposition spokespeople and media demanded he make a speech. When he’s in Venezuela making speeches and talking on television, they want him silenced. As they say in Venezuela, “Chavez has them all crazy” (Chavez los tiene locos).

The truth is, within hours of his surgery for a pelvic abscess on the verge of bursting – which could be very dangerous and requires immediate drainage – the Venezuelan government informed the public of his status. Foreign Minister Nicolas Maduro read a statement that Friday, June 10 on live television from Cuba, where the President had made a final stop on a Latin American tour. The surgery was successful and the Venezuelan head of state just needed to recover. Two days later, Chavez himself called into a live television show on Telesur and spoke for about 20 minutes about the operation and his current status, as well as his road to recovery and full capacity to continue leading the government from his hospital bed. After all, he was not mentally incapacitated, just temporarily physically debilitated from the intervention.

Chavez also explained that the incision to drain the abscess had been “deep”, and as a precaution, biopsies were taken to ensure he had no signs of anything malignant. “The tests all came back negative, nothing malignant”, the Venezuelan President assured the public on live television.

But during the days post-op, media coverage of Chavez’s health rapidly deteriorated into a vampiric binge of false information attempting to portray the Venezuelan leader as “critically ill”. Many claimed the myths they were spreading were due to a level of “secrecy” about the President’s condition. But everyday, high level officials from the government publicly informed about his progress and revealed they were in constant communication with him. Where was the secrecy?

Apparently, when media, yellow-journalists and politicians don’t hear what they want to hear, they make things up and blame the government for lack of information. He had surgery on a very sensitive part of his body and is in recovery and rehab. Everything he had has been removed and he's healing well. For someone who is generally extremely energetic and hasn’t rested or taken vacation in 12 years, one month of post-op recovery is a miminum of what he needs and deserves to get back to his usual self. [NOTE: IN FACT, CHAVEZ EXPLAINED THAT THE PELVIC ABSCESS WAS DETECTED JUST IN TIME BEFORE THE INFECTION SPREAD TO THE REST OF HIS BODY, WHICH COULD HAVE HAD SEVERE CONSEQUENCES. THE SUBSEQUENT TUMOR WAS LUCKILY DETECTED DURING HIS RECOVERY PERIOD AND REMOVED. HE HIMSELF SAID THE TUMOR CELLS HAD NOT BEEN DETECTED OR DIDN'T EXIST BEFORE THE SECOND EXAMINATION DURING RECOVERY. THANKS TO THE CUBAN DOCTORS AND ADVANCED MEDICAL TREATMENT, THEY FOUND AND REMOVED IT ALL].

Despite his absence from the public eye, with the exception of the video footage shown this week on Cuban and Venezuelan television – which showed a thinner, but solid Chavez, talking with the same passion and fire as always – the President has been running the government at a normal pace, signing bills into laws, approving budgets and overseeing his cabinet member’s activities. Everything has been moving forward as usual. There is no lack of governance in Venezuela.

And soon, Chavez will be back in the limelight running the show and the usual suspects will be complaining, once again, about his mighty presence.
Posted by Eva Golinger at 1:01 PM

They always tell lies against the people who are a threat, they did with Fidel and now the Commander Chavez ... Patria o Muerte!

The world should and is obliged to change, the United States poor people need the freedom that never have had strength to the great discrimination, strength of the social groups, strength to all my friends who live there and that both memory and love .. .

My favorite "theory" was from none other than conservative radio host Rush Limbaugh. Limbaugh has been married at least five times. He joked that "Chavez hurt himself with one of his girlfriends in Cuba". What a distasteful joke. I tell everyone I know not to believe the lies and research President Chavez for themselves. The truth is out there, and it makes the U.S. media and government look foolish!