Venezuela Rejects US Sanctions, Evaluates Oil Supply to US 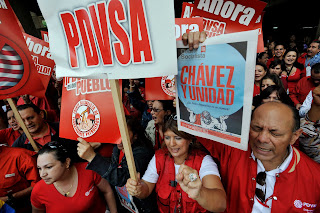 
“Sanctions against the homeland of Bolivar? Imposed by the US imperialist government”, declared Venezuelan President Hugo Chavez on Twitter this Tuesday (@chavezcandanga), “Bring it on, Mr. Obama. Do not forget that we are the children of Bolivar”, he exclaimed, reminding his more than one and a half million followers on the social network that “the true impact of this latest US aggression is the strengthening of our nationalistic and patriotic morale in Venezuela!”

On Tuesday morning, the US State Department, announced it was imposing unilateral sanctions against seven international companies, including Petroleos de Venezuela, S.A. (PDVSA). This decision marks the first time the US government has taken direct hostile action against the Venezuelan state-owned oil company, which is one of the largest oil companies in the world.

According to State Department releases, the sanctions fall under the Iran Sanctions Act (ISA) of 1996, as amended by the Comprehensive Iran Sanctions, Accountability and Divestment Act (CISADA) of 2010, for alleged “activities in support of Iran’s energy sector”. In the case of Venezuela, the State Department claims PDVSA “violated” the US legislation by “selling at least two cargoes of reformate to Iran between December 2010 and March 2011”. Reformate is a blending component that improves the quality of gasoline, which somehow, the US government alleges, can help enable Iran to make nuclear bombs.

The State Department clarified that in the case of PDVSA, the sanctions “prohibit the company from competing for US government procurement contracts, from securing financing from the Export-Import Bank of the United States, and from obtaining US export licenses”. The US sanctions do not affect Venezuela’s supply of oil to the United States, as clearly the Obama administration would not want to directly affect its own interests. Nor do the sanctions apply to PDVSA subsidiaries, such as CITGO, a US corporation owned by PDVSA which has seven oil refineries and over 10,000 gas stations throughout the United States.

The Venezuelan government reacted firmly to the unilaterally imposed sanctions, clearly stating it will no adhere to any decision made by the US government regarding its oil business, nor will it accept any US interference in its relations with other nations. During a joint press conference late Tuesday afternoon, Venezuela’s Foreign Minister, Nicolas Maduro, and PDVSA President and Oil Minister, Rafael Ramirez, labeled the US sanctions as a “hostile act of aggression” against the South American nation. They also announced that Venezuela is “thoroughly evaluating its response” and whether the US decision will “affect the supply of 1.2 million barrels of oil daily to the US”.

On Wednesday, thousands of workers at PDVSA’s installations throughout Venezuela protested the US sanctions and stated they would “defend their oil sovereignty” in the face of “US aggression and interference”. “PDVSA is a sovereign, dignified company that no longer bows down to US agenda”, workers declared, rallying at the company’s headquarters in Caracas.

President Chavez, who is recovering from a knee injury and has been forced to limit his public appearances, tweeted throughout the day. “We don’t just have the largest oil reserves in the world. We also have the most revolutionary oil company in the world!”

In another tweet, he exclaimed, “So, they wanted to see and feel the flame of the people of Bolivar defending the independence of the Venezuelan homeland? Well, there you have it!”

Venezuela’s legislative body also issued a firm declaration on Tuesday rejecting the US-imposed sanctions and warning the US to cease the hostilities against the South American country or Venezuela could stop its oil supply northward. The 40% opposition, anti-Chavez coalition in the Venezuelan parliament refused to adhere to the declaration, instead expressing approval for the US sanctions. Many Venezuelans saw this as a posture betraying their own sovereignty and national security.

The US government, which supported a briefly successful coup d’etat against President Chavez in 2002 and has since been heavily funding anti-Chavez groups with millions of dollars in order to build an opposition movement in Venezuela, has been increasing its aggressive policies towards the Chavez administration during the past few years. In 2006, the State Department imposed its first sanction against Venezuela for allegedly “not fully cooperating with the war on terrorism”, and prohibited the sale of military equipment to the South American country from the US or any company in the world that uses US technology. In a clear attempt to leave Venezuela defenseless, this sanction has been renewed each year to the present date, though the Chavez government has found other suppliers of defense materials not subject to US pressures, such as Russia and China.

In 2008, the Bush administration evaluated placing Venezuela on its unilateral “state sponors of terrorism” list, but concluded it wasn’t possible, due to US dependence on Venezuelan oil. This year, calls from ultra-conservative members of Congress, including Ileana Ros-Lehtinen and Connie Mack, both Florida Republicans who run the House Foreign Relations Committee, have vowed to take “direct actions against Hugo Chavez”. These latest sanctions are a clear result of their pressure, and that of the still influential anti-Castro Cuban-American lobby, on the Obama administration.

In addition to the multi-million dollar US funding of anti-Chavez groups in Venezuela, which feeds an ongoing internal conflict and climate of destabilization, the US government has also been waging a severe demonization campaign against the Chavez government in international media. In 2010, the US Directorate of National Intelligence (DNI), labeled President Chavez as the regional “Anti-US Leader” in its annual “Worldwide Threat Assessment Report”. The Venezuelan President is also regularly referred to as authoritarian, dictatorial and anti-democratic in US media, despite his overwhelming victories in several elections and his oversight of Venezuela’s most vibrant democratic process in history.

Ros-Lehtinen and Mack have again requested the White House place Venezuela on the list of state sponsors of terrorism this year. Though this is a far-fetched objective, this week’s sanctions pave the road towards an even more aggressive policy towards Venezuela, the country with the world’s largest oil reserves.

Chavez faces reelection in 2012, and opposition candidates are bickering over who could unify their parties to challenge the overly-popular head of state. So far, Washington’s hostility is not aiding the opposition, but is actually unifying Venezuelans against foreign interference. Some fear the Obama administration could attempt a “Libya-esque” plan against Venezuela: demonizing the President, funding and supporting the opposition, building up military presence in the region and sanctioning the government, all with the goal of provoking regime change “by any means”.

Meanwhile, Venezuelans stand strong against US efforts to undermine their democratic process.
Posted by Eva Golinger at 9:14 AM

hi sister,great job,i also wnated to ask you afavor,wich will help our common struggles,think u can also expose the role of usaid,aei,open society and otehr globalist think tanks hands in syrias fake revolution?ive pretty much documented the evidence already here...http://syriafalseflag.blogspot.com/ take a look to expose it would be easy and expose not just wash.'s hands in latin america but in arab world as well..take care my fair sister, ;)

US Govt corruption will continue to destroy all that we hold dear unless the citizens of the United States takes their gov't back. Here is how it can be done:

I ONLY buy Citgo gas because of all the good associated with it - how they help the poor... the common people... I am a US citizen and dismayed at all of the corruption in our govt. Hence my plan: www.TheVoterPlan.com

I am a US citizen and dismayed at the corruption of my govt. So I spent the past few years developing a plan to end the corruption and give our govt back to the people. This is the only way I can imagine a brighter future for our planet - end the gross corruption:
www.TheVoterPlan.com

P.S. I ONLY buy Citgo because of all the good associated with the company and Chavez.