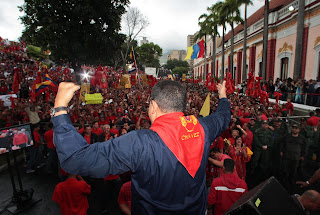 As the coup unfolded and Carmona, then head of Venezuela’s chamber of commerce, Fedecamaras, unilaterally and illegally swore himself into office as president, the constitutional president, Hugo Chavez, was held hostage and incomunicado on a small island military base off Venezuela’s coast. The only non-private national television station, state-owned VTV, was taken off the air by then governor of the state of Miranda, Enrique Mendoza, in an effort to silence pro-Chavez forces and conceal information and events from the people. Private media – all involved in the coup – broadcast cartoons, old movies and soap operas, while print media published articles justifying and supporting the “transition government”.

Ironically, during this week’s coup anniversary, one participant in the April 2002 events, Maria Corina Machado, now a member of the National Assembly, was invited by the Department of State to dictate several conferences in the US, including one in Miami titled “600 Days to Eradicate Authoritarianism: Transforming Venezuela”. While in Miami, Machado “celebrated” with a community of self-exiled Venezuelans, many of whom played key roles in the coup. Machado is slated to be an opposition contender in Venezuela’s presidential elections in 2012.
Posted by Eva Golinger at 3:05 PM

It really was an awesome show of determination and courage on the part of the Venezuelan people; defeat the criminal coup plotters and their puppet master, and reinstate Venezuela's legitimate leader. That day,through that heroic deed they, the Venezuelan people, saved the Bolivarian Revolution, and made clear to the world, but above all to the imperial power, what power of the people and democracy means.

But people of Venezuela, remain vigilant, because the counter revolutionaries forces are lurking around.

Hopefully, such a coup will never happen again. But if evil should manage to slip through the cracks again, and is once more defeated, President Chavez should take off his gloves and kick anyone who conspired against Venezuela out for good.
If these opposition groups have more loyalty to a foreign government, then they should be relieved of all authority and kicked out of Venezuela, never to return. The next time they go to Miami for their miserable conferences, they can just buy a one- way ticket.
Venezuela does not need traiors and saboteurs.