Behind the Coup in Ecuador – The Attack on ALBA 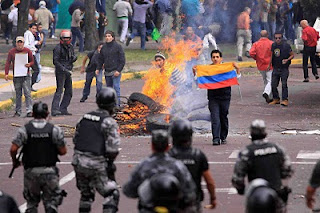 The elections of Sunday, September 26th in Venezuela, while victorious for the Venezuelan United Socialist Party (PSUV), also ceded space to the most reactionary and dangerous destabilizing forces at the service of imperial interests. The United States managed to situate key elements in the Venezuelan National Assembly, giving them a platform to move forward with their conspiratorial schemes to undermine Venezuelan democracy.

The day after the elections in Venezuela, the main advocate for peace in Colombia, Piedad Córdoba, was dismissed as a Senator in the Republic of Colombia, by Colombia’s Inspector General, on the basis of falsified evidence and accusations. But the attack against Senator Córdoba is a symbol of the attack against progressive forces in Colombia who seek true and peaceful solutions to the war in which they have been living for more than 60 years.

And now, Thursday, September 30th, was the dawn of a coup d’etat in Ecuador. Insubordinate police took over a number of facilities in the capital of Quito, creating chaos and panic in the country. Supposedly, they were protesting against a new law approved by the National Assembly on Wednesday, which according to them reduced labor benefits.

In an attempt to resolve the situation, President Rafael Correa went to meet with the rebellious police but was attacked with heavy objects and teargas, causing a wound on his leg and teargas asphyxiation. He was taken to a military hospital in Quito, where he was later kidnapped and held against his will, prevented from leaving.

Meanwhile, popular movements took to the streets of Quito, demanding the liberation of their President, democratically re-elected the previous year by a huge majority. Thousands of Ecuadorans raised their voices in support of President Correa, trying to rescue their democracy from the hands of coup-plotters who were looking to provoke the forced resignation of the national government.

In a dramatic development, President Correa was rescued in an operation by Special Forces from the Ecuadoran military in the late evening hours. Correa denounced his kidnapping by the coup-plotting police and laid responsibility for the coup d’etat directly upon former President, Lucio Gutiérrez. Gutiérrez was a presidential candidate in 2009 against President Correa, and lost in a landslide when more than 55% voted for Correa.

During today’s events, Lucio Gutiérrez declared in an interview, “The end of Correa’s tyranny is at hand,” also asking for the “dissolution of Parliament and a call for early presidential elections.”

But beyond the key role played by Gutiérrez, there are external factors involved in this attempted coup d’etat that are moving their pieces once again.

Infiltration of the Police

According to journalist Jean-Guy Allard, an official report from Ecuador’s Defense Minister, Javier Ponce, distributed in October of 2008 revealed “how US diplomats dedicated themselves to corrupting the police and the Armed Forces.”

The report confirmed that police units “maintain an informal economic dependence on the United States, for the payment of informants, training, equipment and operations.”

In response to the report, US Ambassador in Ecuador, Heather Hodges, justified the collaboration, saying “We work with the government of Ecuador, with the military and with the police, on objectives that are very important for security.” According to Hodges, the work with Ecuador’s security forces is related to the “fight against drug trafficking.”

Ambassador Hodges was sent to Ecuador in 2008 by then President George W. Bush. Previously she successfully headed up the embassy in Moldova, a socialist country formerly part of the Soviet Union. She left Moldova sowing the seeds for a “colored revolution” that took place, unsuccessfully, in April of 2009 against the majority communist party elected to parliament.

Hodges headed the Office of Cuban Affairs within the US State Department in 1991, as its Deputy Director. The department was dedicated to the promotion of destabilization in Cuba. Two years later she was sent to Nicaragua in order to consolidate the administration of Violeta Chamorro, the president selected by the United States following the dirty war against the Sandinista government, which led to its exit from power in 1989.

When Bush sent her to Ecuador, it was with the intention of sowing destabilization against Correa, in case the Ecuadoran president refused to subordinate himself to Washington’s agenda. Hodges managed to increase the budget for USAID and the NED [National Endowment for Democracy] directed toward social organizations and political groups that promote US interests, including within the indigenous sector.

In the face of President Correa’s re-election in 2009, based on a new constitution approved in 2008 by a resounding majority of men and women in Ecuador, the Ambassador began to foment destabilization.

Certain progressive social groups have expressed their discontent with the policies of the Correa government. There is no doubt that legitimate complaints and grievances against his government exist. Not all groups and organizations in opposition to Correa’s policies are imperial agents. But a sector among them does exist which receives financing and guidelines in order to provoke destabilizing situations in the country that go beyond the natural expressions of criticism and opposition to a government.

In 2010, the State Department increased USAID’s budget in Ecuador to more than $38 million dollars. In the most recent years, a total of $5,640,000 in funds were invested in the work of “decentralization” in the country. One of the main executors of USAID’s programs in Ecuador is the same enterprise that operates with the rightwing in Bolivia: Chemonics, Inc. At the same time, NED issued a grant of $125,806 to the Center for Private Enterprise (CIPE) to promote free trade treaties, globalization, and regional autonomy through Ecuadoran radio, television and newspapers, along with the Ecuadoran Institute of Economic Policy.

Organizations in Ecuador such as Participación Ciudadana and Pro-justicia [Citizen Participation and Pro-Justice], as well as members and sectors of CODEMPE, Pachakutik, CONAIE, the Corporación Empresarial Indígena del Ecuador [Indigenous Enterprise Corporation of Ecuador] and Fundación Qellkaj [Qellkaj Foundation] have had USAID and NED funds at their disposal.

During the events of September 30 in Ecuador, one of the groups receiving USAID and NED financing, Pachakutik, sent out a press release backing the coup-plotting police and demanding the resignation of President Correa, holding him responsible for what was taking place. The group even went so far as to accuse him of a “dictatorial attitude.” Pachakutik entered into a political alliance with Lucio Gutiérrez in 2002 and its links with the former president are well known:

In the face of the serious political turmoil and internal crisis generated by the dictatorial attitude of President Rafael Correa, who has violated the rights of public servants as well as society, the head of the Pachakutik Movement, Cléver Jiménez, called on the indigenous movement, social movements and democratic political organizations to form a single national front to demand the exit of President Correa, under the guidelines established by Article 130, Number 2 of the Constitution, which says: “The National Assembly will dismiss the President of the Republic in the following cases: 2) For serious political crisis and domestic turmoil.”

Jiménez backed the struggle of the country’s public servants, including the police troops who have mobilized against the regime’s authoritarian policies which are an attempt to eliminate acquired labor rights. The situation of the police and members of the Armed Forces should be understood as a just action by public servants, whose rights have been made vulnerable.

This afternoon, Pachakutik is calling on all organizations within the indigenous movement, workers, democratic men and women to build unity and prepare new actions to reject Correa’s authoritarianism, in defense of the rights and guarantees of all Ecuadorans.

The script used in Venezuela and Honduras repeats itself. They try to hold the President and the government responsible for the “coup,” later forcing their exit from power. The coup against Ecuador is the next phase in the permanent aggression against ALBA and revolutionary movements in the region.

The Ecuadoran people remain mobilized in their rejection of the coup attempt, while progressive forces in the region have come together to express their solidarity and support of President Correa and his government.
Posted by Eva Golinger at 4:29 PM

My respects for your ongoing work.

"The script used in Venezuela and Honduras repeats itself."

...The script used in Venezuela, HAITI and Honduras

Furthermore, I note that in all three cases, the golpistas declared that the president had resigned of his own free will (including the drafting of faked resignation letter/s), which was only publicly denied by the president in question once his voice could be heard.

Chavez and the leading Politicians are to afraid of laws , to afraid to punish the warlords seeking to destabilize the country. It is time to put these criminals behind bars. The new leadership in South & Latin America have tied their own hands when having to implement the laws and those who blatantly violate them.