CHAVEZ: SECURITY A PRIORITY/COMBATING THE VIOLENCE OF POVERTY 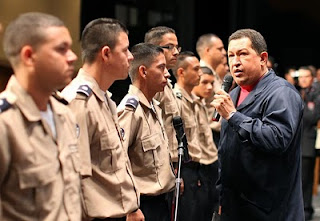 The Venezuelan Government is taking concrete steps to combat a rise of criminal activity and insecurity in the country by also addressing the root cause of violence: Poverty

The New York Times mistakenly headlined last week that violence in Venezuela is worse than Iraq. The sensationalist and distorted article, authored by correspondent Simon Romero, fed an ongoing anti-Chavez campaign attempting to portray Venezuela as a failed state.

Pulling on non-official figures of crime statistics in Caracas and declarations exclusively from anti-Chavez analysts, Romero engaged in the worst kind of yellow-journalism, distracting from the hundreds of thousands of Iraquis killed in the US-led war in the days before President Obama’s announcement of an “end to combat”, to turn the focus to another one of Washington’s targets, Venezuela –much closer to home.

That crime exists in Caracas is undeniable. But to somehow imply, as opposition media in Venezuela do daily, that crime and violence are the “fault” of the Chavez administration is not only absurd, but also dangerously sinister.

Just like in any major urban area around the world, there are frequent incidents of homicide, armed robbery, burglary, and muggings, often exacerbated by the visibly stark divisions of wealth between a minority upper class and a majority poor. Long ago, well before Hugo Chavez became president, middle and upper class neighborhoods erected giant walls and electric fences to live behind, hiding their wealth from the eyes of those with lesser means.

The growth of the wealthy class in Venezuela is largely based on another form of violence and crime, rarely reported in mainstream media. Throughout much of the twentieth century, as Venezuela’s oil industry grew, corruption and so-called “white collar crime” grew with it. Despite oil being nationalized in 1976, poverty increased exponentially as millions in oil wealth were embezzled and stolen by the political and economic elite in power.

They then hid their stolen riches behind gated communities and concrete walls, and bought properties in Miami, New York, Aruba, Curaçao and the Dominican Republic, so the majority poor couldn’t see how they had ravaged the nation, and wouldn’t reclaim what rightfully belonged to the people of Venezuela.

Crime in Venezuela has complex social and political roots. The violence of the elite classes that held power throughout the latter half of the twentieth century created a severely impoverished, under-educated, malnourished and excluded majority. Addressing crime and security in Venezuela today requires finding solutions for the larger social ills facing the nation.

The policies of the Chavez government are focused on eradicating poverty and misery as a first and essential step towards national development and progress. More than 60% of oil profits today are invested in social programs, providing free, quality healthcare and education to all Venezuelans; creating job-training programs and new forms of employment through worker-run businesses and cooperatives; and ensuring food security and sovereignty through a recuperation and expansion of the nation’s agricultural industry together with state-run supermarkets and distribution centers that ensure basic food products are accessible and affordable to all.

Extreme poverty has been reduced by more than 50% during the past ten years, and Venezuela’s literacy program has been hailed as a “model for the world” by the United Nations. Today, Venezuelans are eating better, are better educated, have more buying power and are actively participating in their political and social processes. A new model of communal economy, where communities run their own markets, banks and local services, is being created in order to change the mentality of entitlement imposed by the paternal oil state.

At the same time, there has been an increase in non-traditional criminal activities during the past ten years, including kidnappings, “express kidnappings”, paid assassinations and gang-related murders, most of which take place in the barrios – poor neighborhoods sprawled on the hillsides of Caracas, or in border regions. However, this type of violence has often been exported from neighboring Colombia, one of the most violent countries in the world, in the form of paramilitary forces seeking to gain territory inside Venezuela and aid the conservative opposition in destabilizing the Chavez government to the point of regime change.

Drug-related violence and crime also encompass a majority of incidents in the nation, and while Venezuela is not a drug-producing nation, Colombia is, and exporting drugs to Venezuela has become a key business for Colombian drug-traffickers.

So, while this reality does exist, the Chavez administration has taken key, concrete and effective steps to respond to a circumstance inherited from the neglect, abandonment and corruption from governments past.

In addition to addressing the roots of poverty and crime through social programs and inclusionary policies, the Chavez government is also dealing directly with day-to-day violence through the creation of a new police force, the National Bolivarian Police, and a heightened security presence throughout the country.

On Wednesday, Minister for Interior and Justice Tareck El Aissami, oversaw the permanent deployment of National Bolivarian Police, National Reserve, Homeland Guards and officials from the Transit Authority to secure the 47 metro stations in greater Caracas. Over one thousand forces from these four state security bodies will police the main artery of public transportation in the Venezuelan capital during its hours of operation, in an effort to reduce criminal activity and ensure commuter safety.
A nationwide security deployment also began earlier this year, the Bicentennial Security Deployment (Dibise), combining National Guard, counter-narcotics and national police forces charged with combating drug-trafficking activity and reducing incidents of kidnapping, homicides and general crime. To date there have been thousands of arrests and tons of drugs and illegal arms confiscated.

As part of the creation of the National Bolivarian Police force, a new University of Security was inaugurated earlier this year, which will provide in depth professional academic and physical training for aspiring officers. Human rights and studies of social inequalities are required material for all cadets, in an effort to build a non-corrupt, non-repressive, socially conscious security force.

This pioneering effort will create Venezuela’s first professional police force and will eventually result in the phasing out of other non-professional, corrupt forces operating on a local and regional level.

While the national government is engaging in these concrete steps to reduce crime and violence, local governments – both state and municipal, which control police forces, are doing little or nothing to combat insecurity. The states with the higest crime rates are Miranda, Tachira and Zulia, all three in the hands of opposition, anti-Chavez governors. All three of those states also have the highest presence of Colombian paramilitary forces, which appear to operate freely with the approval of those governors.

As poverty is eradicated and Venezuelans become more socially aware and increase their own participation and responsibility in the building of their nation, crime will dissipate. The combination of social polices directed at improving the well being of all Venezuelans and concrete steps to reduce crime, increase police presence and build non-corrupt forces will ensure long-term safety and security in Venezuela.