US INTERFERENCE IN VENEZUELA KEEPS GROWING 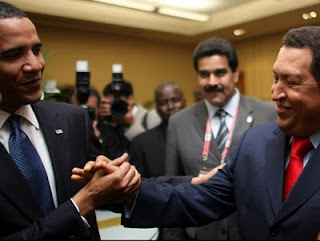 US Interference in Venezuela Keeps Growing

Despite President Obama’s promise to President Chavez that his administration wouldn’t interfere in Venezuela’s internal affairs, the US-funded National Endowment for Democracy (NED) is channeling millions into anti-Chavez groups.

Foreign intervention is not only executed through military force. The funding of “civil society” groups and media outlets to promote political agendas and influence the “hearts and minds” of the people is one of the more widely used mechanisms by the US government to achieve its strategic objetives.

In Venezuela, the US has been supporting anti-Chavez groups for over 8 years, including those that executed the coup d’etat against President Chavez in April 2002. Since then, the funding has increased substantially. A May 2010 report evaluating foreign assistance to political groups in Venezuela, commissioned by the National Endowment for Democracy, revealed that more than $40 million USD annually is channeled to anti-Chavez groups, the majority from US agencies.

The National Endowment for Democracy (NED) was created by congressional legislation on November 6, 1982. It’s mandate was anti-communist and anti-socialist and its first mission, ordered by President Ronald Reagan, was to support anti-Sandinista groups in Nicaragua in order to remove that government from power. NED reached its goal after 7 years and more than $1 billion in funding to build an anti-Sandinista political coalition that achieved power.

Today, NED’s annual budget, allocated under the Department of State, exceeds $132 million. NED operates in over 70 countries worldwide. Allen Weinstein, one of NED’s original founders, revealed once to the Washington Post, “What we do today was done clandestinely 25 years ago by the CIA…”

Venezuela stands out as the Latin American nation where NED has most invested funding in opposition groups during 2009, with $1,818,473 USD, more than double from the year before.

In a sinister attempt to censure the destination of funds in Venezuela, NED excluded a majority of names of Venezuelan groups receiving funding from its annual report. Nonetheless, other official documents, such as NED’s tax declarations and internal memos obtained under the Freedom of Information Act, have disclosed the names of those receiving its million dollar funding in Venezuela.

Of the more than $2.6 million USD given by NED to Venezuelan groups during 2008-2009, a majority of funds have gone to organizations relatively unknown in Venezuela. With the exception of some more known groups, such as CEDICE, Sumate, Consorcio Justicia and CESAP, the organizations receiving more than $2 million in funding appear to be mere façades and channels to distribute these millions to anti-Chavez groups.

Unknown entities such as the Center for Leadership Formation for Peace and Social Development received $39.954 (2008) and $39.955 (2009) to “strengthen the capacity of community leaders to participate in local democratic processes”.

For several years, the Civil Association Kapé Kapé, which no one knows in Venezuela, has received grants ranging from $45,000 (2008) to $56,875 (2009) to “empower indigenous communities and strengthen their knowledge of human rights, democracy and the international organizations and mechanisms available to protect them”. In a clear example of foreign interference, NED funds were used to “create a document detailing the human rights violations perpetrated against them and denounce them before international organizations”. In other words, the US funded efforts inside Venezuela to aid Venezuelans in denouncing their government before international entities.

A large part of NED funds in Venezuela have been invested in “forming student movements” and “building democratic leadership amongst youth”, from a US perspective and with US values. This includes programs that “strengthen the leadership capabilities of students and youth and enhance their ability to interact effectively in their communities and promote democratic values”. Two jesuit organizations have been the channels for this funding, Huellas ($49,950 2008 and $50,000 2009) and the Gumilla Center Foundation ($63,000).

Others, such as the ‘Miguel Otero Silva’ Cultural Foundation ($51,500 2008 and $60.900 2009) and the unknown Judicial Proposal Association ($30,300 2008), have used NED funds to “conduct communications campaigns via local newspapers, radio stations, text messaging, and Internet, and distribute posters and flyers”.

In the last three years, an opposition student/youth movement has been created with funding from various US and European agencies. More than 32% of USAID funding, for example, has gone to “training youth and students in the use of innovative media technologies to spread political messages and campaigns”, such as on Twitter and Facebook.

NED has also funded several media organizations in Venezuela, to aid in training journalists and designing political messages against the Venezuelan government. Two of those are the Institute for Press and Society (IPyS) and Espacio Publico (Public Space), which have gotten multimillion dollar funding from NED, USAID, and the Department of State during the past three years to “foster media freedom” in Venezuela.

What these organizations really do is promote anti-Chavez messages on television and in international press, as well as distort and manipulate facts and events in the country in order to negatively portray the Chavez administration.

The Washington Post recently published an article on USAID funding of media and journalists in Afghanistan (Post, Tuesday, August 3, 2010), an echo of what US agencies are doing in Venezuela. Yet such funding is clearly illegal and a violation of journalist ethics. Foreign government funding of “independent” journalists or media outlets is an act of mass deception, propaganda and a violation of sovereignty.

US funding of opposition groups and media inside Venezuela not only violates Venezuelan law, but also is an effort to feed an internal conflict and prop up political parties that long ago lost credibility. This type of subversion has become a business and source of primary income for political actors promoting US agenda abroad.

On Tuesday, statements made by designated US Ambassador to Venezuela, Larry Palmer, on Venezuelan affairs were leaked to the press. Palmer, not yet confirmed by the Senate, showed low signs of diplomacy by claiming democracy in Venezuela was “under threat” and that Venezuela’s armed forces had “low morale”, implying a lack of loyalty to the Chavez administration.

Palmer additionally stated he had “deep concerns” about “freedom of the press” and “freedom of expression” in Venezuela and mentioned the legal cases of several corrupt businessmen and a judge, which Palmer claimed were signs of “political persecution”.

Palmer questioned the credibility of Venezuela’s electoral system, leading up to September’s legislative elections, and said he would “closely monitor threats to human rights and fundamental freedoms”. He also stated the unfounded and unsubstantiated claims made by Colombia of “terrorist training camps” in Venezuela was a “serious” and real fact obligating Venezuela to respond.

Palmer affirmed he would “work closely to support civil society” groups in Venezuela, indicating an intention to continue US funding of the opposition, which the US consistently has referred to as “civil society”.

These statements are a clear example of interference in internal affairs in Venezuela and an obvious showing that Obama has no intention of following through on his promises.

That the U.S. continues to act as though it has special privileges, including that of abusing whatever privileges it may in fact have -- this surprises few.

The extent to which, and the speed with which it is losing power and influence, however, is well worth taking into account. In other words, the U.S. is becoming increasingly irrelevant.

So, while it is important to discover and publicise its misdeeds, I wish Chavez and some of his supporters would better respond to the U.S. as the dying empire it is.