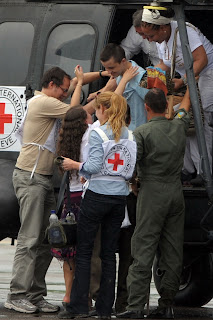 UPDATE: BY THE TIME OF THIS POSTING, PABLO EMILIO MONCAYO HAS BEEN RELEASED TO FREEDOM AFTER 12 YEARS OF CAPTIVITY!

The Colombian Senator, herself and her daughter once hostages of right-wing paramilitary forces, has been leading peace efforts in the country for years. Despite sabotage by the Colombian government, Cordoba and her group, Colombians For Peace, were able to free two more hostages this week. The world kept up with the emotional developments via Twitter.


“They closed the helicopter doors, it’s still really loud, Colombia, give peace a chance!”, read one of Piedad Cordoba’s tweets early Sunday (@piedadcordoba), as she boarded the helicopter that just hours later, brought Josue Calvo home. The Colombian Senator has been leading peace efforts for several years in her country, which has been plagued with a 60-year old civil war between right and left forces.

Colombia erupted in national violence after Jorge Gaitan’s assassination in 1948, which many believe was attributed to the US Central Intelligence Agency (CIA). Gaitan was a charismatic leader, a leftist and a revolutionary, who was set to win the presidential elections before his assassination, during a time when Washington was overly eager to stop the spread of communism in the region. Ten years of non-stop violence followed in Colombia, later transforming into a civil war that has never ceased.

Though the armed leftist groups are classified as “terrorist” by Washington and the current Colombian government, the Armed Revolutionary Forces of Colombia (FARC) and the National Liberation Army (ELN), are still the remnants of the organizations that struggled against the imposition of the right-wing elite that has ruled the country since Gaitan’s death. Paramilitary groups – linked to the current Uribe government – were formed to combat the FARC and the ELN, and subsequently became involved in Colombia’s mass drug trade.

As the years and decades passed, kidnappings became a major tactic used by both sides to impose a state of fear and terror over civilian populations, and extort the other side for money and political and territorial gains.

Piedad Cordoba, Colombian Senator since 1994 and a controversial afro-Colombian and feminist figure, was kidnapped in 1999 by paramilitary forces led by Carlos Castano. She was held for several weeks and later forced into exile in Canada for over a year. Upon returning to Colombia, in 2002, she ran for Senate again and was elected with a landslide victory. Her daughter was subsequently kidnapped and held for several years by paramilitary forces, and two assassination attempts were made against Cordoba, after her return.

Nevertheless, Cordoba has been fighting ever since for peace in Colombia, and currently heads the organization Colombians For Peace. In August 2007, President Alvaro Uribe agreed to appoint Cordoba as a mediator in the humanitarian exchange between the FARC and the government, which continues to hold approximately 500 members of the leftist guerrilla group.

Piedad Cordoba requested the help of President Hugo Chavez of Venezuela to mediate in the hostage release in late 2007. But in November 2007, President Uribe unilaterally suspended Chavez’s role in the mediation efforts and threatened to end the entire negotiation process. Appeals were made by family members of the hostages, along with Cordoba herself, to allow Chavez to continue. In early 2008, President Chavez and Senator Cordoba achieved the first liberations of two hostages held by the FARC for over six years, Clara Rojas and Consuelo Gonzalez.

Since then, Cordoba has continued her efforts for peace and hostage release in Colombia.

UNILATERAL PEACE EFFORT
On Sunday, the FARC unilaterally freed Josue Daniel Calvo, the first of two Colombian military officers that the group had promised to release as a gesture of peace. The liberation of the military officer took place in a jungle region of southeastern Colombia. A humanitarian mission led by Piedad Cordoba picked Calvo up in a helicopter and flew him to Villavicencio, where his father and sister were anxiously awaiting his arrival. The government of Brazil provided the helicopters for his rescue.

Calvo, dressed in a light blue shirt and sweatpants, walked on his own from the helicopter, despite a knee injury obtained during his year of captivity. More than 100 people belonging to Colombians For Peace, dressed in white shirts and holding white carnations, were waiting for Calvo, to welcome him home. “Humanitarian agreement, now”, they yelled, the majority of whom were family members of hostages or ex FARC prisoners.

Despite an agreement with the Colombian government to cease military operations in the region in order to allow for the hostage liberation, Cordoba denounced that the guerrilla group had detected army flyovers over the area designated as a no-fly zone. The Uribe government has sabotaged past efforts to free hostages held by the FARC by flooding the area with Colombian military presence, and hence preventing the liberations.

WE WILL NOT REGRESS
“We are very pleased. There is no possibility that the hostage liberations will be paralized despite everything the Colombian government is doing to sabotage them. Pablo Emilio Moncayo should be released this Tuesday”, affirmed Cordoba on Sunday afternoon. By the time of this printing, Moncayo will hopefully have been released.

Moncayo has been held by the FARC for more than 12 years. His father, Gustavo Moncayo, has led an effort for peace in Colombia during the past few years and, as part of his actions, marched from Bogota to Caracas two years ago. He has appealed to governments and social movements around the world to aid in peacemaking in Colombia. The release of his son Pablo, will be a huge achievement for this activist who has suffered the loss of his child during 12 years.

MINUTE BY MINUTE ON TWITTER
Cordoba used Twitter to inform followers around the world of the status of Calvo’s liberation. “For two years, this has been a lot of work for Colombians For Peace. Tomorrow at 7am we depart to achieve our result. We hope for peace”, she wrote on Saturday, after informing readers of her meetings with church and government representatives. “I have arrived to Villavicencio and am meeting with the High Commissioner for Peace and the Church to coordinate the operations”, also posting photographs of meetings and key events.

“In just minutes we will be landing with good news for peace in Colombia. Peace is possible. Josue Calvo is free!”, she wrote on Sunday afternoon from the helicopter where she flew together with the newly freed hostage. During the humanitarian mission, a “little girl with big black eyes” gave her a bird. “It’s quiet and scared”, tweeted Cordoba, later adding, “I will free the bird in Buenaventura when the humanitarian mission ends”.

The bird was released late Sunday, after Calvo was safe with his family and Cordoba was gearing up for Tuesday’s operation to rescue Pablo Moncayo after more than a decade of imprisonment.
Posted by Eva Golinger at 5:26 PM

Hostage-taking doesn't have much to do with class-struggle and revolution -- which is why the FARC, with their wayward semi-foco-ist strategy, now defer more and more to the Bolivarian Revolution going on next door in Venezuela.

Too bad that the venezuelan class-struggle is going a tad off the rails as well.