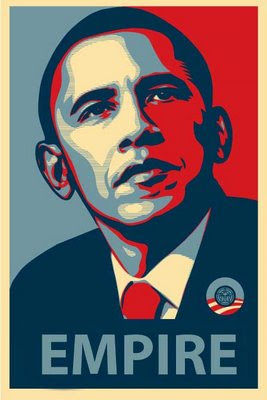 The Obama-era Empire is increasing its attacks on Latin America. This week brings several new developments.

Republican congressman Connie Mack (FL), known for his rabid anti-Chávez stance, introduced - yet another - resolution before the House of Representatives to declare Venezuela a "state sponsor of terrorism".

“Mr. Chairman, I was a vocal critic of the Bush Administration in their hands-off approach to Chavez. I believe that by failing to confront Chavez that we left a vacuum. The Obama Administration must take the dangers of Hugo Chavez seriously. We must confront the Chavez-Ahmadinejad alliance and not wait until it’s too late."

“Today, in a bipartisan manner, I introduced a resolution with my good friend, Congressman Ron Klein, that calls on the Administration to designate Venezuela as a state sponsor of terrorism. Venezuela is a danger that cannot be overlooked, Mr. Chairman."

Last year, the Bush Administration tried to do the same thing, but failed. For one reason: they can't get the oil and declare Venezuela an "enemy nation". So, Mack's resolution probably won't go anywhere, but still it reinforces an ongoing line of opinion about Venezuela, and President Chávez in particular, as "terrorist" and all around evil.

Mack even brings in the ridiculous case of a Los Alamos nuclear physicist who was searched by the FBI last week and, in an attempt to get off the hook, scapegoated Venezuela in the weirdist of ways. Leonardo Mascheroni, an Argentinean nationalized in the US and a former Los Alamos National Laboratory researcher, told the FBI that he received "$20,000 in cash, and had expected another $800,000, for a report that consisted of "unclassified materials found on the Internet." He said he hoped his work would persuade the Venezuelan government -- represented by a man he knew as "Luis" -- not to pursue a nuclear-weapon program and provide him with funding for research on nuclear fusion." That's so strange, because just a couple of years ago in Argentina, another "FBI informant", Guido Antonini, a Venezuelan and US citizen, got busted with a suitcase full of $800,000 cash, which he later tried to say Chávez had told him to give to Cristina Fernandez de Kichner for her presidential campaign.

Seems like $800,000 is a common figure for made-up scandals to try and classify the Venezuelan government as both dangerous and corrupt. Couldn't at least one of them come up with a different figure? I mean, really.

The Antonini "suitcase" scandal was set up by the FBI and was a very, very weak attempt to pull Chávez into some kind of international money laundering conspiracy. No ties to the Venezuelan government were ever evidenced legally. Lots of stuff was made up so the US could get involved and actually prosecute several Venezuelans - non government officials, and friends and business partners of Antonini - today several are in prison in Miami. Yeah, and terrorist Luis Posada Carriles is free. Anyway.

A high level State Department and White House delegation is in Honduras today. Subsecretary of State Thomas Shannon, Assistant Secretary of State Craig Kelly and National Security Council Advisor on Latin America, Dan Restrepo, have headed down to Tegucigalpa to "put and end to the crisis, once and for all". Yeah right. They really are there trying to figure out the best way to legitimate the scheduled upcoming presidential elections on November 29th. The coup d'etat against President Zelaya occurred 4 months ago. The repressive regime in place since then, led by Roberto Micheletti, refuses to step down from power. Zelaya continues to remain harbored in the Brazilian Embassy in the Honduran capital. Meanwhile, Clinton spoke to Micheletti on Saturday and agreed to talk to the Defense Department about letting him have access to some of the Pentagon's radars that are stationed throughout Honduras, in order to detect "foreign invaders". So, they really are working together after all.

The United States continues to be one of the only regional nations still maintaining diplomatic relations with the coup regime in Honduras. As State Department spokesman Ian Kelly confirmed yesterday, the US Ambassador in Tegucigalpa, Hugo Llorens, is in constant contact with Micheletti. No surprise. Washington had full knowledge of the coup before it happened, funded those actors involved, aided militarily - the US military base in Soto Cano (Palmerola), Honduras, was used to transport President Zelaya forcefully out of the country on the morning of the coup - and the US has continued to fund both the illegal regime and the Honduran military. Commercial ties have remained in tact between Washington and Honduras and no action - literally no action - has been taken by Washington to really pressure the regime. From day one, the Obama administration's stance has been to "let it all just play out" - that position has allowed for countless deaths, injuries, persecutions, tortures and violations of human rights to occur. We are not asking the US to intervene, we are asking the US to STOP intervening by pulling out its military forces and funding, and by ceasing the constant flow of cash to the coup regime and its supporters, via USAID, National Endowment for Democracy (NED) and State Department funding.

The elections on November 29th cannot be allowed to take place in this environment. The only viable solution that brings justice to the people is to bring down the coup regime and then convene a constitutional assembly to create a new political-social-economic structure for the country.

This Friday, Colombia and Washington seal the deal allowing for the largest US military presence in Latin America ever. The agreement will permit the US to occupy 6 additional military bases in Colombia (it already occupies three) and will allow US military and security forces, including contractors, to US all Colombian military and police installations throughout the entire country, basically converting Colombia into one big US military base. Neighboring countries, such as Ecuador and Venezuela, have expressed grave concern over this excessive US military presence in the region. The agreement stipulates that the purpose behind the military expansion is to combat "drug trafficking, terrorism and regional threats", and to guarantee "security and democracy" in the region. Considering the efforts of the US to relate Venezuela to both terrorism and drug trafficking, our concerns are accurate.

Just yesterday, the Venezuelan government caught several Colombian intelligence agents spying inside Venezuelan territory. This will increase once the US further digs itself into South America.

As someone who has spent the last decade investigating, studying and analyzing day by day Washington's actions towards Latin America, I have to say, things in the Obama-era are much worse. The aggression is increasing at a rapid pace and most people still seem deceived by Obama's happy face and teleprompter poetry.

People in the US should demand that the billions of dollars going into threatening the peoples of Latin America should be used to provide housing and health care in the US. Then we could be talking about some real change.
Posted by Eva Golinger at 10:31 AM