The (unfortunate) Lies of Michael Moore (about Hugo Chávez) 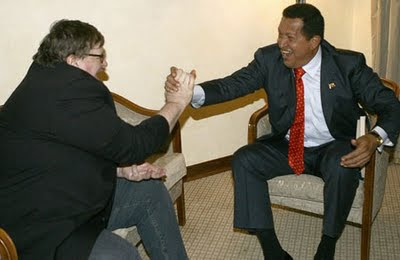 In an interview last October 9th on Jimmy Kimmel Live!, the renowned and award-winning documentarian, Michael Moore lied vulgarly about his encounter with Venezuelan President Hugo Chávez during the Venice Film Festival this past September. In the interview, Moore responds to Kimmel’s request for an explanation of a photo of Moore with President Hugo Chávez. Apparently embarrased about the encounter with one of Latin America’s most prominent and influential heads of state, Moore proceed to completely make up a fairy-tale, attempting to pass it off as reality.

With a straight face, Moore stated he met President Chávez at 2 o’clock in the morning, after he and his wife had settled into bed in their Venice hotel room and heard a scandalous noise coming from the floor above. Moore states that he called down to the reception to find out “what the hell was going on”. “It’s the president of Venezuela”, the hotel clerk allegedly told Moore. Well, Michael couldn’t believe it, so despite his wife telling him “don’t go”, Moore set out, determined to find out if the true source of the scandal was really the Venezuelan president, the polemic Hugo Chávez.

Incrediously, Moore says he went upstairs and knocked right on Chávez’s door and a large man answered, who Moore claims was the president’s “bodyguard”. Chávez was right behind him and caught a glimpse of Moore and yelled out “Michael Moore, come on in!”. Anyone who has ever traveled or been close to President Chávez knows very well that it is absolutely impossible to just “go knock on his door”. Presidential security lines the hallways, elevators and all entrance points. Take it from someone who knows first hand. Moore’s story is complete and utter fiction. Also the man Moore identified in the interview as Chávez’s “bodyguard” is actually Foreign Minister Nicolás Maduro, but hey, all latinos look alike!

The tale continues. Moore says he entered the room and a “bottle and a half of tequila later”, he was writing Chávez’s speeches! Of course, Michael, all of us Latin Americans drink tequila! Man, he couldn’t even get his alcohol right in his fairy tale! Tequila is Mexican, Michael. Venezuela makes rum. Get it straight. And anyway, President Chávez does not drink at all and is well known for his anti-alcohol position. But in Moore’s story, latinos are all a bunch of partiers! No work, just party, drinks and fun at 2am!

Moore is exceptionally full of himself towards the end of the interview with Jimmy Kimmel. He says Chávez asked him for advice about his upcoming United Nations speech. Moore sternly told the South American president to “say sorry for calling Bush the devil, “el diablo”” during his last UN intervention. And to say this time around it’s all about the “hope”! Way to defend Bush, Michael! Wait, didn’t you write, direct and film Farhenheit 9/11? Right, but when someone “non-US” tells it like it is, you get way patriotic. I get it.

The interview ended with Michael fully praising himself for yet another one of President Chávez’s brilliant United Nations’ speeches. “When I heard the first few lines of his speech”, says Moore, “it was exactly what I had written for him!” Michael, Michael. Don’t you know that Chávez doesn’t use a teleprompter? Where we come from, speeches are made from the heart and soul, and not written by an elite team of 20 writers and then read from transparent screens. And Michael, do you really think that flattering yourself at this point, after you have lied so tremendously, is appropriate? Arrogantly, Moore joked that Chávez should give him a “year of free gasoline” for writing his speech. At least he didn’t say bananas.

Michael Moore has been known for his documentary work; filming and telling “facts”. But on this ocassion, Moore has turned into the worst of yellow journalists, a liar and story-teller on the big screen. Despite the fact that Moore insisted
”no cameras” document his meeting with President Chávez in Venice, the official Venezuelan presidential press snapped a few photos, and there were many witnesses. The photographs evidence a Michael Moore and a President Chávez serenly sitting in two chairs talking. No tequila, no parties, no scandals, just a normal meeting between a head of state and an invited guest. In fact, the real meeting lasted three hours, without tequila.

Michael Moore prohibited cameras in the meeting because, per his own words, it wasn’t “convenient” for him to been seen with Chávez. Despite the fact that every presidential meeting has been documented by the official press, this time, they defered to Moore with respect. He was, after all, an admired figure by millions of Venezuela. But, the presidential press was able to capture a few photos of the encounter. These photos now are the key evidence to expose Michael Moore’s vulgar lies about his meeting with President Chávez.

Moore’s comentaries about President Chávez asking him to “help” write his United Nations speech demonstrate Moore’s extreme ego. President Chávez is one of the most brilliant speakers in the world, with an immense capacity to bring together a variety of ideas while being coherent. Of course, Chávez nourishes his speeches and talks with ideas, experiencies and the writings of many, but for those of us who spend almost every day listening and watching President Chávez, we know that nobody writes his speeches, not even him! He speaks from his heart, and not from a teleprompter!

Moore’s declarations against President Chávez are offensive and insulting and a clear sign of his hipocresy and lack of ethic. How many times has we heard President Chávez acclaim Moore’s books and documentaries? And most recently, Chávez announced that Moore’s latest documentary, “Capitalism, a love story”, would premiere here in Venezuela.

Moore’s response to this admiration, acclaim and support is to lie and ridicule President Chávez and the people of Venezuela, and to attempt, lamely, to justify his meeting with Chávez. Because in the end, this whole ridiculous tale told by Moore about his “meeting” with President Chávez is an attempt to avoid admitting before the US media that he met for three hours with the South American “dictator”. And he probably learned a lot, and liked it!

Michael Moore is a most unfortunate coward.

(See the videoclip here:
Posted by Eva Golinger at 11:22 PM

Even as his personal defects, I suppose that his film could be interesting of viewing. The States is the only developed country when openly pro-ultra-capitalistically discourses are listened by popular strata (mainly white working classe and white little bourgeoisie). Of course, openly pro-ultra-capitalist policies are conducted in Europe, Canada or East Asia, but in all these three cases are normally covered by a so-called "social" or "compassionate" phraseology.

What a disgrace! There can be no excuse - none - for what MM did on this interview. I am painfully disappointed by his cowardly act.

Eva - I hope that you don't mind that I reposted your full article on my blog:

I will also add your blog to my blogroll.

Michael Moore is about the only one on the left, who has DVDs for sale in suburban malls. To some his work, is the most left news they get.

I recently heard him speak at a screening. Before SICKO was released in the US, it was scheduled on 1,000 screens. After giving certain interviews, it was cut to 400 screens.

There are material reasons for his behavior.

The uncomfortable lie then.

@Renegade Eyes: There are material reasons for his behavior

Are you saying that he was trying to win back the favors of those who get to decide how many screeings his movies get?

If yes, he is deeply mistaken. Look at the entire 9/11 Truth Movement which began as a small group of (often lunatic) folks making halfhazard speculations, and who currently has become a large, grassroots movement spanning the entire globe lead by numerous professional organizations! In the age of the Internet, one does not need to accept the diktat of the corpoate world to get an audience.

Besides, doing something morally wrong for "pragmatic reasons" is always self-defeating. As one Russian poet wrote "only clean hands can make miracles happen".

However, when he actually tells the truth about things, he is called a liar by mainstream U.S. commentators.

So give the guy a break, he does alot to speak truth to power that breaks through the U.S. mainstream barrier. He is not perfect, but compared to the other lies and bullshit of U.S. ideology, he is a saint!

I have seen the MM visit to Fallon and was surprised that Ms Golinger was so upset by MM`s comments. I believe that MM may have taken some liberties and exaggerated some elements of his encounter with Hugo Chavez, yet I found his account in concert with most of his previous reporting, e.g. General Motors, Iraq war, the Columbine shootings, the health care crisis in the U.S. and now the Capitalism "love story". In short, I feel that MM and Chavez are in agreement in most political matters today and would find good company with each other anywhere.
MG Kay

"I feel that MM and Chavez are in agreement in most political matters today and would find good company with each other anywhere."

Moore is a propogandist who would be comfortable working in any Socialist/marxist/fascist/communistcountry where he could continue to distort the truth about the USA while (as hedos now) acepting the fruits of being part of the ruling class (In the present situation as a millionaire).

I like your work and generally agree with you, but I must make exception here. Michael Moore is joking around on Jimmy Kimmel. I don't think this is intended as a serious critique or should even be taken fully at face value. He's telling a tale on a late night comedy show.

I see that Michael Moore's comments on US TV are being fairly attacked. I ask only that he explains why he said those things. And I believe an apology may well be due from a guy who usually is responsible. If he meant to be humorous, I believe it was not well thought out. I, at least, am totally embarrassed by his
comments.

I agree with you, Eva: Michael Moore acted cowardly in what he said about Hugo Chavez and Venezuela.

And most of all, I praise Chavez and you, for your courage, in not pandering to capitalist demagoguery, and standing up for the truth, equality and democracy for all people, when the powers that be have made the U.S. people ignorant and rabid, like in an Orwellian "grouphate".

Shrug it off like water off a duck's back, yeah, compa?