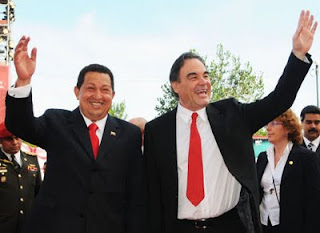 VENICE, Italy — Venezuelan President Hugo Chavez received a movie star welcome Monday at the Venice Film Festival, where he walked the red carpet with director Oliver Stone for the premiere of the documentary "South of the Border."

Hundreds of admirers, some chanting "president, president," gathered outside of the Casino for the leader's arrival. A few held up Venezuelan flags and a banner in Spanish that read "Welcome, president."

Chavez threw a flower into the crowd and touched his heart, and at one point took a photographer's camera to snap a picture himself. Security outside the Casino was tightened in advance of his arrival with military police checking bags.

Chavez praised Stone's work for depicting what he said were improvements made across Latin America.

"Rebirth is happening in Latin America, and Stone went to look for it and he found it," Chavez told reporters. "With his cameras and his genius, he's captured a good part of that rebirth."

Stone says "South of the Border" is meant to illustrate "the sweeping changes" in South America in recent years as a direct counterpoint to what some say is Chavez's depiction as a dictator by U.S. and European media.

Stone spent extensive time with Chavez for the 75-minute documentary, which is premiering at the Venice Film Festival on Monday, and also interviewed the leaders of Argentina, Brazil, Ecuador, Bolivia, Cuba and Paraguay, whom Stone said "are on the same page" as Chavez.

"He's a guy you should meet and get to know. ... He's the star of the movie," Stone said in an interview before the premiere.

Stone said he wanted to illustrate changes that put leaders in many South American countries in power who represent the majority of their populations, a movement started with Chavez. He cited Bolivian President Evo Morales, the first Indian to be elected president, and Brazil's Luiz Inacio Lula da Silva, a well-known trade unionist.

"If you look now, there are seven presidents, eight countries with Chile, that are really moving away from the Washington consensus control," Stone said. "But in America, they don't get that story."

Stone was invited to Venezuela to meet Chavez for the first time during the Venezuelan leader's aborted rescue mission of Colombian hostages held by FARC rebels. The mission was aborted, but Stone said the Chavez he met was different than some U.S. media depictions.

Stone is best known for his dramas, but he also has made four documentaries, including "Comandante," the 2003 documentary based on a meeting with Cuban leader Fidel Castro, which the director says in many ways led him to Chavez.

"I used the real man," Stone said. "I hope you realize how dynamic he is in the movie. What I like about the film is you see how sincere he is on camera. You don't see a guy who is a phony. He's not a dictator."

Stone had said he spent "several hours here and there" with Chavez. The movie shows him at Chavez's enormous desk and visiting the president's childhood home, where he rides into the frame on a child's bicycle, which breaks under his weight. He immediately offers to pay for it. Footage also shows Chavez driving his own vehicle and stopping to greet supporters.

Stone said he didn't see it necessary to present the opposition's case in his film.

"A dark side? There's a dark side to everything. Why do you seek out the dark side when the guy is doing good things?" Stone asked. "He is a democrat and there is opposition to him, and he's not perfect. But he is doing tremendous things for Venezuela and the region."

Chavez's critics accuse him of growing increasingly authoritarian while sidelining key opponents and trying to clamp down on the private media.

Opponents also say Chavez's international crusade against U.S. influence is misguided, and accuse him of ignoring problems at home ranging from rampant crime to corruption.

Stone concedes that Chavez "says things unnecessary to provoke. I think he doesn't have to do that." But he said his opinion of Chavez only improved during the making of the documentary.

"People forget that he cut the poverty rate by one half," Stone said. "People in Venezuela are getting an education, they are getting health care and welfare. He actually delivered on what he said he would."

The movie's screenwriter is Tariq Ali, the British-Pakistani historian who most recently wrote "Pirates of the Caribbean: Axis of Hope" and it was produced by Fernando Sulichin. Stone also was advised by economist Mark Weisbrot of the Center for Economic and Policy Research.

"South of the Border" is showing out of competition at the Venice Film Festival, which ends Saturday with the awarding of the Golden Lion.
Posted by Eva Golinger at 2:22 PM