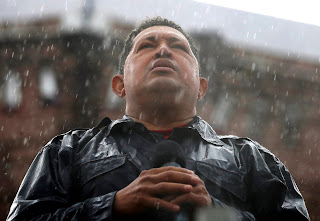 Most of what you read or hear in mass media about President Hugo Chavez is always negative, his faults exaggerated, his discourse distorted and his achievements ignored. The reality is quite different.

Hugo Chavez was beloved by millions around the world. He changed the course of a continent and led a collective awakening of a people once silenced, once exploited and ignored. Chavez was a grandiose visionary and a maker of dreams.

An honest man from a humble background who lived in a mud hut as a child and sold candies on the streets to make money for his family, Chavez dreamed of building a strong, sovereign nation, independent of foreign influence and dignified on the world scene. He dreamed of improving the lives of his people, of eradicating the misery of poverty and of offering everyone the chance of a better life – the “good life” (el buenvivir), as he called it.

President Chavez made those dreams come true. During his nearly fourteen years of governance, elected to three full six-year terms but only serving two due to his untimely death, Chavez’s policies reduced extreme poverty in Venezuela by more than 75%, from 25% to less than 7% in a decade. Overall poverty was reduced by more than 50%, from 60% in 1998 when Chavez first won office to 27% by 2008. This is not just numbers, this translates into profound changes in the lives of millions of Venezuelans who today eat three meals a day, own their homes and have jobs or access to financial aid.

But the dreams don’t stop there. Chavez dreamt of a nation filled with educated, healthy people, and so he established free, quality public education from preschool through doctoral studies, accessible to all. In fact, for those in remote areas or places without educational facilities, schools were built and mobile educational facilities were created to bring education to the people. Chavez also created a national public health system offering universal, free health care to all, with the help and solidarity of Cuba, which sent thousands of doctors and medical workers to provide quality services to the Venezuelan people, many who had never received medical care in their lives.

To strengthen and empower communities, Chavez propelled policies of inclusion and participatory governance, giving voice to those previously excluded from politics. He created grassroots community councils and networks to attend to local needs in neighborhoods across the nation, placing the power to govern in the joint hands of community groups. His vision of diversifying his nation and developing its full potential transformed into railways, new industries, satellite cities and innovative transport, such as MetroCable Cars soaring high into the mountains of Caracas to connect people with their steep hillside homes and the bustling city.

The centuries-old dream of Independence hero Simon Bolivar to build a unified “Patria Grande” (Grand Homeland) in South America became Chavez’s guiding light and he held it high, illuminating the path he paved. Chavez was a driving force in unifying Latin America, creating new regional organizations like the Union of South American Nations (UNASUR), the Bolivarian Alliance for the Peoples of Our America (ALBA) and the Community of Latin American and Caribbean States (CELAC). These entities have embraced integration, cooperation and solidarity as their principal method of exchange, rejecting competition, exploitation and domination, the main principles of US and western foreign policy.

Chavez inspired a twenty-first century world to fight for justice, to stand with dignity before bullying powers that seek to impose their will on others. He raised his voice when no others would and had no fear of consequence, because he knew that truth was on his side.

Chavez was a maker of dreams. He recognized the rights of the disabled, of indigenous peoples, all genders and sexualities. He broke down barriers of racism and classism and declared himself a socialist feminist. He not only made his own dreams come true, but he inspired us all to achieve our fullest potential.

Don’t get me wrong, things are not perfect in Venezuela by any stretch, but no one can honestly deny that they are much better than before Hugo Chavez became President. And no one could deny that President Hugo Chavez was larger than life.

The first time I flew on President Chavez’s airplane he invited me to breakfast in his private room. It was just me and him. I was nervous and felt anxious and rushed to tell him about the results of my investigations into the United States government role in the coup d’etat against him in 2002. After all, that’s why I was on the plane in the first place. I had been invited to participate in his regular Sunday television show, Alo Presidente (Hello Mr. President) to present the hundreds of declassified documents I had obtained from US government agencies through the Freedom of Information Act (FOIA) that exposed US funding of coup participants. The date was April 11, 2004, exactly two years after the coup that nearly killed him and sent the nation into spiraling chaos.

As I began pulling out papers and spreading documents on the table that separated us, he stopped me. “Have you had breakfast yet”, he asked. “No”, I said, and continued fiddling with the revealing paper before me. “We can discuss that later”, he said, “for now, tell me about yourself”. “How is your mother”, he asked me, as though we were old friends.

A flight attendant came through the door of his private room with two trays and placed them on the table. I quickly gathered up the documents. “Let’s eat”, he said. I started to protest, trying to explain that his time was so limited I wanted to take advantage of every minute. He stopped me and said, “This is a humble breakfast, a breakfast from the barracks, what I most love”. I looked at the tray for the first time. On it was a small plate with an arepa, a typical Venezuelan corn patty, a few shreads of white cheese, a couple of pieces of canteloupe and some anchovies. Beside the plate was a small cup of black coffee. No frills and not what you would expect on a presidential airplane.

“After all, I am just a soldier”, he added. Yes, Chavez, you are a soldier, a glorious soldier of a dignified, proud and kind people. And you are a maker of dreams for millions around the world.

Thank you very much for this article! Hugo Chavez is gone but his Revolution will live on.

Yes, Hugo Chavez was too good to be true, and it's also true that he's endlessly demonized here in the U.S. I can't even have an intelligent conversation about Chavez here in liberal Seattle.

Chavez' African counterpart, Muammar Gaddafi, fared even worse. Some of the stories the media made up about that man are simply bizarre.

In the meantime, here's a question to ponder: Should Hugo Chavez be inducted into Maria Lionza's political court?

I know it sounds like a crazy question, but the symbolism and educational value are extraordinary. One Venezuelan professor predicts Chavez will indeed find a place in Maria Lionza's political court, next to Simon Bolivar.

Like he says, it will be the result of the will of the people, not some bureaucratic process. Still, the process might be speeded up by publicizing the idea.

Please see my article at www.viva-chavez.com/Topics/Maria_Lionza and the Facebook group at https://www.facebook.com/groups/149019085260497/?fref=ts

Also, please check out my Venezuela Symbols site at www.geosymbols.org/World/Venezuela - especially the Introduction. It's largely a tribute to Hugo Chavez, who modified Venezuela's flag and coat of arms and was also associated with the famous statue of Maria Lionza in Caracas.

Thank you Eva for sharing the simplicity of this experience you had with Hugo. I enjoy to read & learn about Venezuela from your reports. We have lost a warm true heart & a great champion in Hugo. But maybe we all become Chavez now. I am an artist & I will renew my efforts to create art that might humbly help.

I was drawn in my spare time over last couple of weeks to re immersing myself in the stories of Cuba's faithful revolution (Still besieged) & Venezuela's building of democratic socialism & Bolivia's Union's President blessed by old PachaMama & all the south American peoples governments that have risen. I feel hope & conviction from this, which also makes me all the sadder at the loss of Hugo & Che & Allende, Victor Jara & all the good warm heros of my mothers tongue. We have their music & example to continue & weather the new attacks.

The new Pope is spanish speaking but was an opponent of liberation theology- I heard this, I still must confirm it. But I believe we must rock the boat & that Evolutionary Justice (If I may call Liberation Theology also that! ) is a vital struggle. Our consciousness, is the natural & vital Pilot of our species evolution, given free will to choose & if we don't rock the boat & struggle for a better just world then a worse & worse state of humanity will naturally evolve & in the end God & Jesus & all religions will be lost because they didn't speak out & involve themselves in our evolution to justice effectively. So what I wish the new Pope would see is that liberation theology will save the church & our world.

Maybe the leaders of the church are not sincere though & wish instead to diffuse the progress of the peoples new south american socially centered democracies with a new spanish speaking, but status quo supporting, distraction. Who is 'radical' instead on less centraly important issues & old chessnuts of debate.

Like you, I am also a US Latino son of parents from Costa Rica and "Chavista" to the bone. I always read your writings but I miss your videos from RT's "atras de la noticia." Are you still doing that program? If you are, how come I don't get your videos in the mail?

The question we ought to ask is how has Venezuela's opposition party, traditionally an enclave that has represented the interests of the elite and the oligarch come to rally with commoners seeking social justice and equity? Is that to say that has suddenly become the presumptuous battle cry of Venezuela's opposition party or just a clever ploy in order to destabilize an incumbent president who has made a meal of the economy?But the better question might be who stands to gain if the Venezuelan opposition party resumes power….? And why is this a story the mainstream media is willing to explore ?