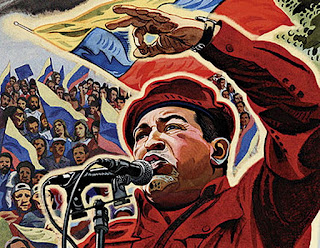 Inspiration South of the Border

The Occupy Wall Street protests spreading across the United States have finally garnered the attention of national and international public opinion. The prolonged economic crisis and exclusionary political structure have propelled thousands of people in the United States to step out of their comfort zones, take to the streets and demand change. Brutal police repression in response to peaceful demonstrations in cities throughout the US has made international headlines, evidencing the hypocrisy of a government quick to accuse and criticize others for human rights violations, while perpetuating the same, if not worse, nasty behavior at home.

Many analysts and commentators have attributed the protests in the US to the so-called “Arab Spring” taking place in Tunisia, Egypt and other Middle Eastern and African nations. The movements in the US and Arab world have shared similar tactics and characteristics, including the use of social media such as Twitter, YouTube and Facebook to mobilize demonstrations and publicize protest activities and state repression. The protagonists of these revolts have been primarily young people and those outraged and disgruntled at systems that have failed them and left millions impoverished with no opportunities.

In Spain and Chile, similar demonstrations have taken place since the beginning of 2011, led by thousands of youth and students protesting unfair and unequal political and economic systems. The demands of all these protests, from the Arab World, to Europe to the United States, have included basic rights such as free education, dignified jobs, housing, healthcare and more inclusion and participation in politics and government. Less representation, more participation – these are the cries of the “indignados” rising up around the world.

What few have noted, or have intentionally omitted, is how the peoples of Latin America arose at the beginning of this century, with demands and dreams identical to those protesting today in the US, Europe and Arab nations, and were able to take power democratically and begin re-building their nations. The influence of the twenty-first century revolutions in Latin America on the Occupy Movement and the Arab Spring cannot be underestimated.

INSPIRATION SOUTH OF THE BORDER

Slogans, chants and comments by Occupy Wall Street protestors calling for an end to corporate rule and demanding more equitable public spending and opportunities for the majority (the 99%) are familiar to those heard throughout Venezuela in the 1990s, when privatization overtook the oil-wealthy nation, multinationals ruled and the people were relegated to shantytowns.
Decades of exclusion, repression and mismanagement of government and resources in Venezuela led the people (the 99%) to revolt in 1989 against an administration quickly selling their nation to the highest buyer. The “Caracazo” on February 27, 1989, was a mass popular uprising in Venezuela’s capital, Caracas, against privatization and globalization; against corporatocracy. The government, led by then President Carlos Andres Perez, responded with brutal repression. Over 3,000 were violently killed by state authorities. Bodies were hurled into mass graves and left to rot.

But the brutality of state violence did not stop the Venezuelan majority. Throughout the 1990s, the people began to organize their frustrations into a nationwide coalition seeking to break free of the two-party “representative” system that had ruled for decades. As the economy faltered, banks collapsed, politicians embezzled and stole what they could and tried to sell the rest, the people mobilized. In 1998, a new president was elected by this grassroots movement, ending the reign of corporate rule guised as democracy.

The new government, led by Hugo Chavez, promised a complete transformation of the system. It would be deconstructed and rebuilt by the people. Democracy would no longer be “representative”, it would be participatory. There would be a redistribution of public resources to ensure the 99% were included. Healthcare and education would be free, universal and accessible to all. A new constitution would be drafted and ratified by the people, to reflect the needs, dreams and realities of today’s society. People would govern on a grassroots level through community councils and assemblies, which would control local resources and provide community members with decision-making power over how resources should be used. Community, alternative and public media would proliferate and be encouraged by the state, in order to broaden access and ensure all voices were heard.

Foreign debts would be ended and relationships with international financial institutions terminated. Important strategic resources would be nationalized and taken back from multinational corporations and placed under worker control. Public enterprises would become worker-run and owned. Foreign policy would be based on sovereignty and respect for other nations, with an emphasis on integration, cooperation and solidarity instead of exploitation, competition and domination.

This is not a utopia, this is the Bolivarian Revolution in Venezuela. It has taken years to build and there are still decades to go and many problems and difficulties to overcome, but the people of Venezuela, the 99%, were able to take power democratically and transform their nation.

In 2005, the indigenous peoples of Bolivia won power through democratic elections, after centuries of exclusion, colonialism and domination by a minority ruling class. They rose up and mobilized against the racist, corporatocracy ruling their nation and took it back. Under the presidency of Evo Morales, the nation’s first indigenous head of state, a new constitution was drafted and ratified by the people in national referendum and major social transformations have been taking place to implement a system of social justice.

In Ecuador, after years of political and economic turmoil, revolts, coup d’etats and several ousted presidents, the people elected Rafael Correa and the Citizen’s Revolution came to power in 2007. Freeing the nation from the reigns of the International Monetary Fund and World Bank, reviving the economy and transferring power to the people are actions that are transforming Ecuador into a sovereign, dignified nation.

NEUTRALIZE, DESTROY OR CO-OPT THE REVOLUTION

While all of these Latin American revolutions are still in process, their emphasis on grassroots nation-building, people’s power, social justice and true sovereignty have clearly inspired others around the world to fight for change in their own nations. But why have so few failed to see the importance of the influence of these revolutions on what is taking place today in the US, Europe and the Arab world?

Primarily because these are successful, democratic, peaceful revolutions by the people, of the people and for the people. There was no “outside” influence that directed them, manipulated them or tried to “co-opt” them, as has happened in the case of the “Arab Spring”. They did not come about by wars or violent revolts, but rather through democratic processes. Of course there have been many attempts to neutralize and destroy these Latin American revolutions, including a coup d’etat in Venezuela in 2002, an attempted coup in Bolivia in 2008 and another attempted coup in Ecuador in 2010. All have failed to date.

US agencies, such as the National Endowment for Democracy, the International Republican Institute, the National Democratic Institute, Open Society Institute and the US Agency for International Development (USAID), have been funding and manipulating many of those groups and organizations involved in the different revolts in Arab nations. The Obama administration has been heavily involved in the movements in Tunisia and Egypt, evidenced by continuous visits by State Department representatives to these nations to ensure the political outcome is favorable to US interests. Washington has also been attempting to promote similar uprisings in nation’s with inconvenient governments, such as in Syria and Iran. The brutal war against Libya and extrajudicial assassination of Muammar al-Gaddafi was a skewed attempt by the US to front a “people’s revolution” in the North African nation.

The manipulation and infiltration by external forces in movements in the Arab world have contributed to their chaos, disorder and failure to materialize into real revolutions- true transformations of their political, economic and social structures. It would be a bitter, tumultuous defeat for the US and its Western allies were these Arab nations to build the sovereign, revolutionary movements millions in those lands are demanding.

And back in the US, the violent repression against the Occupy movement is a clear attempt to neutralize and discredit the first possible coalition that could grow into a powerful political force which could free the country from the democrat-republican reign. While this movement struggles to consolidate and define its objectives, the revolutions south of the border continue to expand.

Corporate media censors, distorts and attempts to silence the advances of the people’s movements in Bolivia, Ecuador, Venezuela and other Latin American nations. The leaders of these movements are demonized by mass media in an effort to diminish the importance of their actions and to turn them into fearful characters viewed as “madmen”.

Despite these attempts to tarnish them, Latin America’s revolutions of the twenty-first century have paved the way for others in the Global South, and the North, to raise their voices and join together to build a better world.
Posted by Eva Golinger at 1:47 PM