Venezuela: Firm Rejection of US Aggression 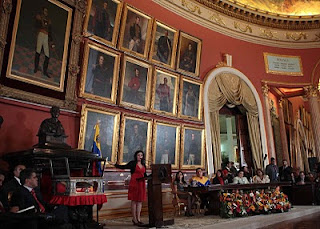 On Tuesday, President Hugo Chavez presided over a state event in the presence of all branches of government and regional representatives, to express the nation's rejection of threats and attempts to undermine Venezuela's democracy

"The people of Venezuela, the people of ALBA nations, the people of our America and the world will defeat the pretensions of US imperialism that seek to escape its own crisis by provoking more war and violations against the people of the world", stated an "Anti-Imperialist Manifesto" signed by all heads of the five branches of government during a special event held in the historic and prestigious Elliptical Room of Venezuela's National Assembly on Tuesday.

The state event "in defense of the sovereignty of the nation and against hegemony and imperialism" was convened by President Chavez in reaction to an event held last week in the US Congress titled "Danger in the Andes: Threats to Democracy, Human Rights and Inter-American Security", during which several US congressmembers called for harsh, direct action to be taken against Chavez and other presidents from member nations of the Bolivarian Alliance for the Peoples of Our Americas (ALBA). Also present at last week's anti-ALBA event in the US Capitol were several fugitives from Venezuelan justice, such as Globovision president Guillermo Zuloaga, and coup leaders from Bolivia and Ecuador, including Ecuadorean Lucio Gutierrez, charged with leading efforts to overthrow President Rafael Correa last September.

The congressional event was interpreted by many throughout the region as a sign that a now republican-dominated Congress will increase hostility towards countries in Latin America such as Venezuela and Bolivia, which already have tense and difficult relations with Washington. At the conference, US congressman Connie Mack (republican from Florida), declared, "now that republicans are a majority...we should confront Hugo Chavez directly", insinuating that the House Sub-Comittee on Foreign Relations for the Western Hemisphere, to be headed by Mack, will initiate actions against Venezuela in 2011.

The new Chair of the House Foreign Relations Committee, congresswoman Ileana Ros-Lehtinen from Miami, also indicated efforts would be undertaken to increase aggression against President Chavez, stating, “We should work closer with regional allies to confront the danger against democracy in Venezuela”.

Ros-Lehtinen, well known for her close relations with anti-Castro Cuban terrorists Luis Posada Carriles and Orlando Bosch, both responsible for the bombing of a Cuban airliner in 1976 that killed all 73 passengers aboard, as well as a series of other terrorist acts in the region, later referred to Chavez as a "repressive leader" and reiterated her calls to work for his "removal from power". In 2006, the Florida congresswoman declared during a television interview that she would encourage and "welcome anyone who assassinates Fidel Castro or any other repressive leader".

Such language was perceived by Venezuela and other Latin American nations as a clear and direct threat.

On Monday, Bolivian President Evo Morales directly charged congressman Connie Mack with the responsibility "should anything happen to President Hugo Chavez". Morales' comments were made during the inauguration of this week's meeting of defense ministers from the Americas, during which US Secretary of Defense, Robert Gates, was present.

"This congressmember, Connie Mack, made statements that could be interpreted as a call to assassinate President Chavez", said Morales. "Should anything happen to Chavez, Connie Mack will be one of the people responsible".

AGAINST HEGEMONY AND IMPERIALISM

At Tuesday's historic event in Venezuela, keynote speaker Eva Golinger, a Venezuelan-American attorney, investigator and writer, who has spent years researching and denouncing US intervention in Venezuela and other Latin American nations, outlined a pattern of tactics and strategies being employed against the Chavez administration. "At the beginning of 2010, the US Director of National Intelligence, who coordinates all 16 agencies of the US intelligence community, classified President Chavez as 'Anti-US Leader in the region'. Saying 'anti-US' is the same as saying 'enemy'...This is language of war".

Golinger also highlighted how during the "past five years, the US government and mass media have conducted a severe media campaign attempting to demonize President Chavez and his government". This effort, said Golinger, "tries to justify the escalation in hostility and aggression against Venezuela, as well as provide reasons for an ever-increasing amount of funding US agencies provide to Venezuelan opposition groups".

Eva Golinger also proposed the Venezuelan government enact a law to "regulate, control or prohibit foreign funding for political activities" in the South American nation. Many countries have similar laws. United States law prohibits all foreign funding from any entity, private or state, to political parties or campaigns in the US, while the Foreign Agent Registration Act (FARA) controls any person, organization or entity receiving foreign funding for lobbying, public relations or activities "directed by or in the interests of a foreign actor".

During his speech at the sovereignty event, President Chavez heard Golinger's request for a foreign funding law loud and clear. "I implore the National Assembly to urgently pass a law to end US and foreign funding of NGOs and political parties in our country", he exclaimed, adding, "This must end. We can no longer be a docile Revolution, we must radicalize our position". Chavez also called on the other branches of government present to act against threats and violations of Venezuela's laws and sovereignty.

The presidents - all women - of Venezuela's Supreme Court, National Assembly, Electoral Power and Citizens Power affirmed their commitment to defending the nation against any external or internal threat, and signed the "Anti-Imperialist Manifesto" at the conclusion of Tuesday's event.

"In this bicentennial period, we ratify our unwavering commitment to the culmination of our Independence through the consolidation of our sovereignty and the construction of unity amongst our peoples, and we proclaim that our response to the imperialist threat will be: more unity, more independence and more integration", read the Manifesto ratified by Venezuela's state powers this week.

The Manifesto will be signed by supporters throughout the country during special events to be held during the following days in defense of Venezuela's sovereignty.